#BookADayUK Day Five: Book You Bought Despite the Cover I'm not exactly sure what the problem is, but this cover grosses me out. While maybe this book isn't my favorite, the Iron Seas series in general is my most favoritest steampunk series, and it's pretty far up there in terms of alt-histories more broadly. If I hadn't overcome my revulsion to this dude's torso, I never would have found one of my favorites. So let's just catalog the things that bother me, yes? First there's the portal thing, which I think is supposed to be on an airship, but looks like a sewer grate. This is me just avoiding talking about the headless torso, which is what really bothers me. Book cover artist have been chopping the heads off of ladies for a while, and I guess it was time for some gender balance. And the leather jacket: what is that, pumpkin sleeves? I just, ugh.

It's possible I'm just freaking out about this guy's torso in particular (sorry dude, I'm not trying to shame you) because I found this alternate cover to The Iron Duke which doesn't bother me: I think there's a torso-to-jacket ratio that appeals to me. Kinda like the Golden Ratio, but manlier. Get out of the ratio, and it's down into the Valley of Shuddering. Oh, I also found this German language cover, which is hilarious: I can't figure what that nob is attached to, plus I just thought the word nob really hard. Also, the Iron Duke has escaped from the Sims again; they called and want him back. Otherwise, the whole thing is so adorably awkward.

Oh, and the French cover is lovely, but if that is supposed to be Mina Wentworth (and who else would it be?), then you've got a whitewashing situation on your hands. Mina's biological father is Mongolian, and she encounters a fair amount of hassle because she "looks Asian". (I'm dancing here a little, just because I know there's no such thing as a racial "look". But Mina, in comparison to the other citizens of London, looks more like the members of the conquering Golden Army than other Britons. And for sure she didn't have blue eyes.) I do like the octopus hairpin though.

Anway, just as an aside, I'd put a lot of 70s science fiction covers in this category, although the trouble is that often I do not indeed buy the books, because they are terrible. There is a lovely round-up on io9 of a large number of 70s sf covers that are bananas. I own this book from that list:

I could not tell you, down to the blurb, what the hell that cover is about. Reader, I bought it anyway. ♥♥♥UKL♥♥♥

Oh, and I think this cover for 1984 is very silly, but I think I married into this one, and didn't purchase it myself: 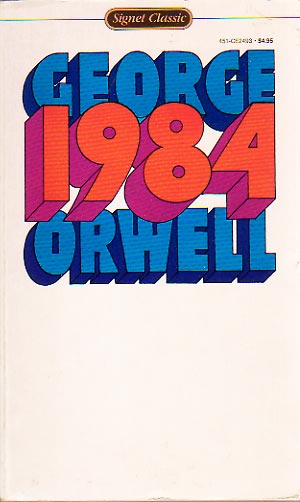 It's like Big Brother asked Big Bird to design this cover, and he schoolhouse rocked it!

Well, now I'm just randomly googling stuff and giggling, so I should wrap it up. Have a good weekend everyone!