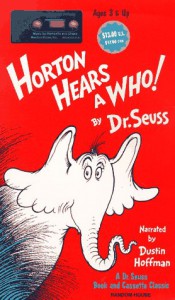 Trigger warning. I've had to loop back and add this, because it turns out I'm going to say some dark stuff tonight. I feel vaguely apologetic about this happening under the auspices of a children's book review, but Suess knew kids lived in this dark world with the rest of us. May we all be better and brighter.

I couldn't rightly say how many times I've read this -- and all other Dr Suess titles -- but we read it again this evening. Suess is such a deeply formative writer for me; even just the name conjures these odd memories of my dad reading to me in the weird room that was mine until my sister was born when I was not quite five. The room was on no floor of the house but its own, four steps up off a hallway. Good god, Victorians, way to build.

Before I get too down a rabbit hole of my childhood, I just wanted to make an observation real quick. Suess slipped in early, so I often don't engage with his work as a thinking adult, so it's funny when it happens. Horton's been drafted into the abortion debate in recent years: "a person's a person" and all that. I'm not interested in getting into that here (so I shouldn't have brought it up, but whatever.)

This is what I noticed today: Horton works pretty well as a metaphor for institutional responses to mental illness. The kids were mortified by Horton trussed and treated for his (supposed) delusions,  and Horton is more and more frantic in his need to prove the reality of his mental state. I felt fairly cynical about the kangaroo's quick turnabout after the YOPP this time around. Even if we can prove our pain...well, I've had a discouraging week watching people troll Robin Williams's daughter on twitter, let alone the various "news" "personalities" who called him a coward.

Well, so that escalated quickly. I don't mean to be so dark, and in a children's book review, etc. But you guys? I'm sick in the pit of my stomach all day from current events in Ferguson. I'm sick for my country, for mothers, for children. I'm just sick; we all are. A person's a person, no matter, no matter at all.