Not supposed to be depressing? 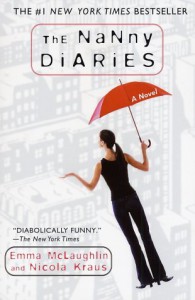 I've been listening to audiobooks this week because I've been working alone a lot, and I started The Nanny Dairies today. (The selection of audio is bad at the library, and most everything I really want to read is on hold.) Am I supposed to find this severely depressing? I'm not, right? The Midwest has a whole different style of parent-shaming - these brittle Upper East Side households might as well be on the moon - so I don't think it's that I'm taking it personally.

Still, the domestic burlesque played for finger-pointing comedy feels close to home. When I got knocked up with my first, I had to sit in waiting rooms filled with pregnancy and parenting mags, almost all of them full of bulleted articles about how you were going to fuck up your kid. "Cover of You're a Terrible Parent Magazine," my husband and I say to one another when one of the kids drops yet another f-bomb or we get that call. It's the kind of joke that belies real anxiety, one that is fed nonstop by...everyone? And mostly over things that aren't even a thing.

I'm not immune. I had a long conversation today about Lunchables, which are verboten in my house, with my son. He'd picked up on my condescension, and, being 10, wanted to pile on about how awful they are and how anyone who fed them to their kids was being dumb. I had to do a lot of furious backpedaling, because I can see their utility to parents who don't have a lot of time, and the nag factor, and the ease. I'm sure there are plenty of people who would look in horror at my Nutella and Ritz cracker sandwiches I put together for more than a few after school snacks - the fat! the salt! the sugar! The whole thing is a minefield, and I pick my battles - to mix my martial metaphors - but the ones I don't pick are lost by default. There's a lot of default.

I'm going to top off my drink, do a load of laundry, and consider whether I'm going to finish this.