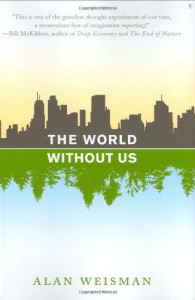 Oh man. The current imagination seems to run to the post-apocalyptic these days: I am Legend, any Romero film, World War Z, The Road. They imagine the last days of humanity in loneliness or zombies. This book leapfrogs over that to a time post-human. What have we wrought that will survive for a day, a year, one million years? It's fascinating.

Weisman trots the globe checking out places where humans have abandoned a patch of land for one reason or another: Cypress, Chernobyl, the DMZ in Korea. His story telling leaves you with the relentless growth of plants and the songs of birds, lonely and vibrant, nature reclaiming the earth in an astonishingly quick period. Some things are currently forever: plastics, radiation, and there's a sadness in that too. I was strangely affected by the image of the lonely Voyager probe on its journey through the galaxy and the idea that it will likely be the last man-made thing in the galactic neighborhood, should we go the way of the dodo in the next couple thousand years. But then, I've always been a science fiction nerd.

I really enjoyed this book.