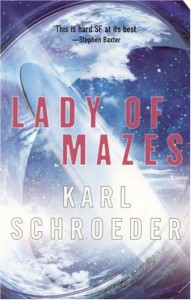 In science fiction, it seems like a lot of current authors have been hanging out in the kiddie pool of futurism, fifty years from now, so that their characters can safely (or not so safely) make reference to Seinfeld. This cheeses me off, as I don't really want to be making reference to Seinfeld now, let alone in 50 years. I'm going to give this book mad props, yo, for dispensing with all that yucky currentism and diving off into a world that really only mirrors ours in the ideas, man, THE IDEAS.

But (there's always a but) sometimes this sort of thing is just a little too out there, a little too in-your-head. We start the story in something called a manifold, a sort of consensual reality peopled by like-minded folk, whose realities are shored up and completed by tech-locks, that deny access to technology and the artifacts of technology that share similar ideas. The manifold we're introduced to first is Barrastea, a sort-of tech-friendly Politics Land, and are then quickly introduced to Raven's World, where everyone is a depressing Tonto caricature. The people in these manifolds are often physically in the same place, but the interaction between the manifold structures and tech-locks, mediated through AI or nanites or some crap like that, edits the reality so that people from different manifolds don't perceive one another.

Are you bored and/or confused yet? Good. That's how I felt yet, and I was only 50 pages in. We are then introduced to several hundred other ideas, mostly embodied by some poorly differentiated people who all talk the same. A not exhaustive list: votes, the Government, something called anicleptics, sims, angels, AI, crippleview, animas, etc. I had a really hard time keeping all this stuff straight, and at a certain point, I felt like I was reading a math equation with a bunch of symbols to ideas that I didn't understand fully. Wait, could someone explain i again? Was she the one with the fruit bowl on her head, or the other one with the nice boots?

My other complaint is that there seems to be this pervasive idea, in science fiction, that we're heading to a world where people will become so soft, so mired in television or VR or AI or something, that we'll all lose our humanity and spin off into fanciful narratives of our own devising, cut off from reality and our brutal, red-tooth-and-claw essentialness, which is a Bad Thing. War and murder and all that cease to be because we're too busy hanging out on MySpace or something. And we need war! We need to give a crap about something so much we're willing to kill and die! Roar! Time for the Butlerian Jihad, baby. (I realize I've just disappeared up my own asshole of scifi-nerdness, but this is my review, and I'm sticking to it.) I kind of hate this idea. I guess I'm glad somebody's worried about how much tv I'm watching these days, but I think maybe it's a little silly, as there's plenty of nasty, brutish, and short to go round, which is an actual Bad Thing, not a theoretical Bad Thing.

So, yeah, this book was not for me, but I'm going to hold by my initial statement that Schroeder has mad skillz in the creation of weird, unique futurism that really thinks about the Ideas, man.