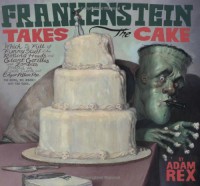 Turns out, inadvertently traumatizing your own children isn't as funny as it sounds. (Other people's children, now, that's an entirely different bag of hornets.) I've been taking the kids regularly to a small museum near my house that's devoted to the subject of electricity. It's maybe a three-room museum, but the grounds and building are lovely. They have a theremin, weird magnet toys, and a heart meter thing. In the back of the back room, past the surprisingly boring display on the history of electrification in Minnesota, is this sweet AV display about Frankenstein.

It's a small room set up like a Victorian lab-OR-a-TOR-y (you can tell it's pronounced that way), complete with a blood-streaked sheet draped over a prone figure. You hit a switch on the wall, and then...well, I have no freaking clue what happens then, because this is the point when my kids promptly lose their minds and drag me from the room. This has been going on since I started taking them there. I thought maybe now that the boy's older, he would be able to stand it. Not only will he not go into the room, he won't let me go in the room alone to check out the lab on my own, in a sweet-but-seriously-annoying display of concern. The girl does her best foghorn impression and clamps onto my legs.

So, sigh, I've had to answer a lot of questions about Frankenstein, and my answers tend to start with, “He's just a story. It's not real.” I've tried lightening the mood with bits from Young Frankenstein, but Gene Wilder I am not. Why is it that the stuff we're afraid of, like Frankenstein or zombies, has a durability that the sweet stuff does not? I recently evaporated Santa in a short Q&A session with the boy and he was surprisingly nonchalant about Mr Claus' unreality: “I still get toys, right?” But ole Frank keeps popping up like Jason freaking Voorhies. The best part is, when I finally do get to see the display at the museum, it's going to be totally laaaaame, I can just tell. Parenting rocks.

Chandra recently gave a glowing review of the first book in this series, and my little eyes lit up. (I accidentally got the sequel.) Yes! A funny book about Frank! Maybe I can de-freakify the whole idea of our bolt-necked friend! So I read it to him the first night home from the library, and promptly give him nightmares. Yes! No wait, no. No good. But I know about the sparkly allure of things that scare the crap out of me, and the boy demanded I read it to him the next couple of nights as some sort of self-imposed immersion therapy. It totally worked. Yes!

This book is really funny in that there's-no-way-the-kids-are-catching-all-the-references, but thanks for throwing them in there, Mr Authorman. Like this, from four seasonal haiku:

Tokyo summer.
Mothra flies into a sign
again and again.

Nice! Ezra Pound notwithstanding, the haiku is maybe the funniest form in English this side of the limerick. (I know, I know, the form began seriously in Japan, but in English, hai-larious.) The art is variable and well done, visually referencing advertising, comics, postcards, blogs, etc. There's even some photography. It has chapters with titles like “Drakula Jr. Wants a Big-Boy Coffin” or “Edgar Allen Poe Hears Sweet Music Like the Dulcet Tones of Angels or Whatever.” The former chapter is drawn in the style of the Peanuts cartoon; the latter makes excellent use of Mr Poe's raven. There were even Girl Scout zombies for me to work on my own phobias. (Girl Scouts, brrr.)

This book appears to be the sequel to Frankenstein Makes a Sandwich, and I'm looking forward to more fun with Frank and Friends once the library digs it out of the stacks. I bet you a dollar the kids won't go anywhere near the exhibit though, still. Sigh.