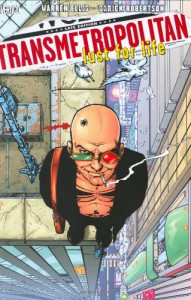 If I were ever to have inappropriate sexual thoughts about a comic book character, and I'm not saying I do, it would be Spider Jerusalem. Silly, but completely nonexistent fantasies notwithstanding, I'd only ever read the first collection, and then maybe 8, 9,and 10. So I've read how the series starts, and how the series ends, but what goes on in the middle has been the subject of some overheated conjecture. When did he acquire the filthy assistants? What's up with the Smiler guy? I just found 2, 3 and 4 at a local used bookstore, and I'm totally jazzed to have more – ahem – Spider in my life. Hubba hubba.

But it's sweet for other reasons too. I'm having a late summer total reading meltdown, and I can't quite figure out what the problem is. I was reading criticism and Frankenstein, but then I lost Frankenstein and I need some fiction in my life lest I go nuts. Then the library tells me it has motherf**king Twilight in for me, which I'm attempting to read on a dare from from sister. (It was a double-dog dare, just for the record.) Twilight is really hurting me; I mean really, but I should probably save my kvetching on the subject for later, should I get though the agony before the library demands the book back in two weeks.

So Transmet shows up, and it's the absolute perfect freaking antidote to reading a story about an unspecial girl wanting to toss her underpants at a dangerous, bad man. I get to be the unspecial girl, and I have my underpants in hand. And oh boy is Spider dangerous and bad, but there's this weird glee in all of the drug abuse, hatred of authority, and wallowing in perversity. Spider, for those of you who haven't been giggling and writing “Mrs. Ceridwen Jerusalem” all over your Trapper Keepers, returned from self-imposed exile to “the City”, a fictional future-American city that appears to be all American cities rolled into one, in the last collection. He then sets to writing his column known as “I Hate It Here” which takes on Presidents, religious leaders, and other atrocities. The second collection continues his adventures: he acquires an assistant, of “filthy assistants” fame, does a bunch of drugs, and generally gets himself into trouble with authority. He also watches a lot of tv.

Now, I'm not a major fangirl when it comes to comics. I've never done the thing where you go down monthly and pick up the most recent, long-awaited issue of “Anime Hotties Play with Teddie Bears” or whatnot because a) I'm not a 14 year old boy b) I wouldn't even know where to begin to find the stuff not aimed at 14 year old boys and c) each freaking issue, which has maybe 10 pages in it, costs approximately $500. This stuff isn't pulp anymore, in the strictest sense of the word, all glossy and pretty and expensive. So collections are a weird way to read them, but tough.

So. The collection is kind of choppy and episodic, but in a good way. Spider Jerusalem is set apart from that piece of crap nihilist you dated in college (yeah, you know the one; or possibly, you were the one - you know who you are) because he actually, in his shriveled blackened heart, believes that words are transformative, that they can make a difference. I don't mean in the I-read-this-one-book-once-and-it-changed-my-life way, (although that's cool too.) but in the hurling-lit-incendiaries-at-the-powers-that-be and laughing as they scream and dive for the fire extinguishers. (Neither will he bang your roommate nor clean out your checking account.)

This collection is probably better than the first because we've already gotten the establishing facts out of the way. The lovely thing about series – I mean this both for tv and for books – is that there's time to screw around and do nothing, have a conversation about little things, order some take-out. These are the sections of this series that I found most enjoyable: the chapter that stands out for me is the one in which Spider decides to watch television for something like 3 days straight, orders some shoes, and then discovers he can drive people to suicide on call-in shows.

But then, even when you're reveling in flinging poo at the Man and gibbering, Ellis undercuts you, knocks your legs straight out from under you. The chapter “another cold morning” tells the story of Mary, a woman who has been cryogenically frozen and then revived in whatever future the story is set in. It's narrated by the typed words from Spiders column, and occasionally Spider's bespectacled eyes, the cigarette smoke curling over his face, are visible under the illustrations of her life: life, sickness, death, the frozen interim, revival, trauma, degradation, alienation. “She'd been foisted upon a future already busy enough with its own problems by a past that couldn't have cared less.” The story winds down; Mary ends up inevitably on the streets, talking “to anyone who will listen” about the past. Spider leans in and listens.

This is crazy cool: the woman who is the embodiment of history and the evidence of the present's characteristic indifference toward the past, but then is also a person made manifest, and then also an artifact of Jerusalem's story that you just read. She doesn't speak; Spider speaks for her. He tells her story, but then he's there under the story, this weird concept of authors and their own form of narrative cruelty and narcissism. But the cruelty is shot through with kindness, and the narcissism is expansive. It all kind of makes my head hurt, and I feel like I need to draw a chart or something. The story ends with the lines, “Mary will live for maybe another century. But her story's over. Because you wouldn't have it any other way.”

That's not the end of the chapter though. Spider rises and stretches, smokes and considers the screen of the computer where the words he just wrote gleam in the half-light. He goes out on the balcony and watches snow fall on the City, flicking his cigarette butt off into the air. At a certain point there is nothing left to say, because there's a limit to what words can do. And while it's fun as all get-out to watch an author-proxy hit a slimy, disreputable politician with a bowel-disrupter right before he's about to get on-stage and enact more indignities on the language, sometimes one has to acknowledge that many of life's cruelties are not premeditated and rely on no agency. Put more simply: life is (often) shit, and (sometimes) there's no one to blame.

So yeah, I love Spider Jerusalem. And I want a pair of his glasses. Now, back to Twilight and its particular cruelties.