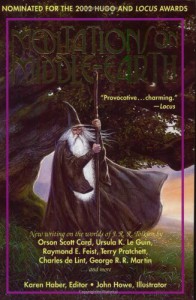 I've been cheating on my real book with a regularity that hints at callousness, and this is one of my mistresses. (What is the term for a male mistress, anyway? Gigolo? Boy toy? Beard?) It was a fun read, if you're into this sort of thing, as I most avowedly am. The contributors are a veritable who's who of scifi and fantasy, and many of the essays relate their first experience with Tolkien. These stories are all incredibly compelling to me, because I love, love the sensation of having a book overtake my life and wallowing in the otherness of the worlds within. For these writers, especially the fantasists, Tolkien took over their lives in a much more concrete way that the lost weekend I had when I was fourteen. Tolkien's books made them write, because they didn't want it to end. They had to find more, even if they had to make it up themselves.

So, like most collections, there are better and worse sections. The stand-outs, for me, were Michael Stanwick and Terri Windling, whose accounts of how Tolkien's works fit into their separate childhoods made me choke up a bit. Michael Stanwick gave voice to my feeling, after finishing Lord of the Rings the first time, of how awful it all was. Not because I hated the book, but because while Good People may win in the end, and all that, it's only after all kinds of things and people get irrevocably broken, killed or destroyed. And, of course, nothing will be the same, because being the same would mean that Evil was out there trucking still, which it is. Windling, interestingly, was much more compelled by Tolkien's essay “On Fairy Stories”, which has clear and long-reaching effects in the wonderful series of fantasy collections she's edited over the years. Ursula K. LeGuin, in characteristic fashion, delivers a thoughtful piece about the metrics involved in Lord of the Rings, which may sound boring, but absolutely sparkles with LeGuin's intelligence. God, I love that woman.

Now, for some hating. The section by Douglas A. Anderson, who is listed ominously on the back flap as a “Tolkienist”, wrote an essay so boring that I actually fell asleep with my eyes open. Orson Scott Card seizes the opportunity to get up on his big stupid hobby horse about how modernism is dumb. “Modernists treat everything as allegory,” he growls, harrumphing and popping his monocle. Then he makes up some imaginary straw-man argument in which a modernist read allegorically, and then rips that apart like tissue. Well done, Mr Card! You win a gold star for being deliberately obtuse about modernism, and then sounding like a grumpy old jackass on top of that. So far, my favorite parts may be about modernism “rearing its head” in Tolkien's life, and how Tolkien's entombment in academia would have somehow insulated him from the horrors of modernism and its Sauronish ways.

This is, of course, poppycock. Tolkien was an academic, for crying out loud, and more importantly, he fought in WWI. His distaste for technology and science, his ennobling of rustics, his self-conscious return to outmoded storytelling forms, owes a hell of a lot to the pre-Raphaelites and other fin de siecle Romantic movements. The difference is what while the Romantics suspected the end of the world was nigh, the modernists actually knew this to be a fact. WWI stuck the fork the concept of benevolent monarchy, unimpeachable progress and the wisdom of the recent past, you know, not that these ideas hadn't been articulated before. I've always had a hard time differentiating the Romantics from the Modernists, because I've always seen more continuity than fracture in their ideas, but now I see the main difference is where the two groups go for their answers: the Romantics looked backwards and the Modernists forward. The Romantics maintained that that the civilized past was where it's at, while the modernists suspected the the choices of the past led irrevocably to the fubar of WWI, and even then, WWI was just the staging ground for another world wide conflict brewing on the horizon.

My argument is not perfect or anything: the movements toward primitivism and folk art in Modernism show a sort of delving into the past, or at least into cultures perceived as more uncomplicated. But this is different from where the Romantics looked, like those high baroque cultures of Byzantium or the Renaissance. Modernists suspect that civilization is anything but civilizing, and the crust of artifice must be removed to find the true, authentic thing. In many ways, Tolkien follows the modernist approach in delving deep in an attempt to strip things down to essentials. I've always found it ironic that LOTR gets smeared as a “bad novel”, in the sense that, as a novel, it seems badly constructed. The pacing is weird, the characterization iffy, there's thousands of ridiculously unlikely events and coincidences that make up the bulk of the plot. (Please don't freak out; I love this book.) But that's the thing: on a very real level, Tolkien is messing with form just as earnestly as any of the other big, canonical heads of the early Modernism. Just because it wasn't stream of consciousness, doesn't mean it wasn't as revolutionary, as the thousands of LoTR-clones since written have shown. Tolkien looked past the novel into story and that's the true thing he found. (As an aside on the subject of imitators, although it's always coded, several of the contributors take apart the f**king author of The S-Word of Shannara for being a total douche. I love this.)

So, this book was a good mistress. It was cute and playful, and utterly unlike the novel I'm currently married to. It helped me crystallize some ideas I've had about Tolkien for a while, but now I'm going to go buy a bottle of wine and get down to the business of trying to recapture the romance. Wish me luck, and may love prevail in the end.