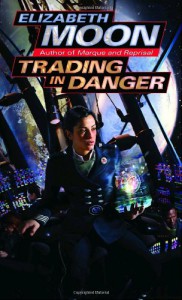 When I first started reading, my husband asked me about this book, and my response was “It's like reading about the Ferengi.” This is not altogether fair, as the later plot of the book roughs up my sense of the overly mercantile vibe that wafts off the earlier sections, but it's never entirely dispelled. The protagonist, Ky Vatta, is the girl-scion of a large, intergalactic FedEx. She has chosen to go into some Star Fleet-proxy, and then gets her ass kicked out due to some political wankery that never really makes a ton of sense. Her family sends her to scrap an old ship, a commission which is more or less designed to make her man up, and come of age and all that. She gets embroiled in one of those Kobayashi Maru things that sf authors are so fond of, only this time with farm machinery. (Sorry about all the geek checks.) (No, not really.)

Despite the recent darker glosses on space opera, like the freaking incredibly stellar (pun intended) Battlestar Galactica, space opera has at its heart a sort of gee whizzy ideas-over-characters frontier sensibility. It has been a while since I was in my Asimov phase, during which time I read maybe 10 of his books (which constitutes roughly .05% of his published books). His characters can usually generously be called characters, his novels relying more on spring-loaded plots and clever ideas. The pleasures of reading derive from an almost schematic sense of the order of things, the events drawing lines between this idea and that, and the people moving the action along are almost secondary beings, satellites to the inexorable mass of concepts.

This is probably where the smears of scifi's inherently juvenile nature sneak in. I think of my step-bother (now a lovely young man) and the sign we had to hang around him when he was young to remind him to be less of a jerk: people are more important than things. Because of the ideas-over-character sensibility of lots of space opera, sometimes authors engage in some of the most vicious, horrible, nihilistic acts for the sake of the plot, for the sake of the idea, and I'm sometimes surprised at how little comment this sociopathy receives. The most obvious example I can think of is Darth Vader blowing up Leia's home world right in front of her, presumably along with all of her friends and family, her childhood haunts, the place where she had her first kiss, everything. So now we've established that Vader is a world-destroying maniac, and Leia, while sad, will never knowingly betray the rebellion, but I've always been bothered by this. If Leia were an actual person, this would be game over, she would be hollowed out, destroyed. After going through the motions of the dork awards that conclude the action, she would go alone to her room, on a planet that will never be home, and howl and scream from this great and terrible loss.

I'm being pretty hard on a simple coming-of-age quest tale that reduces Eastern philosophies to magical plot points, but I'm not the one who called Joseph Campbell in the first place. (I'm probably also feeling betrayed by Episodes 1-3, and have been taking out my aggression on movies I otherwise love.) So, anyway, what does this all have the do with Trading in Danger? I feel like this book really tried to overcome the characterless plot-drive of space opera, tried to invoke meaning in the otherwise meaningless deaths of characters, but it did so by sacrificing a snicking plot that would have been totally awesome, had it come together. When you put a gun on the table in act one, I want to see that sucker fired in act three, or a damn good reason why it's still sitting there unfired. This is not existentialism, after all, this is frakking space opera. There were so many unfired guns. So many.

Ky Vatta felt relatively real, but I was consistently bothered by lost opportunities. Why is it that everyone else thinks she's got a thing for the lost boys, but it's made clear again and again that she really doesn't? I think having a thing for lost boys is just fine, and might humanize the fact that every single decision she makes is the right and prudent one. And while she felt relatively human, albeit slightly too perfect, everyone else was 2d cardboard all the way. Tough but loving sarge? Check. Jackass misogynist other captains? Check. Falstaffy chief of something? Check.

I don't know. I don't want to throw this book under the bus too hard. I have a feeling some of my problems might stem from the fact that this book is the first in a series, and the author left way too much for the next book. I don't like this, but if I did, in fact, get off on series, I would be pumped for the next round of Ky's adventures in space.