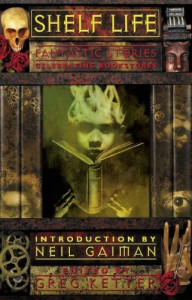 DreamHaven is a local, science fiction book store I've been known to frequent, although much less recently since they moved from a location in walking distance to over by the river. I knew Greg Ketter had a small press, but this is the first book I've ever actually read from that press, and I'm pretty jazzed I did. Shelf Life is a collection of stories about bookstores. Yes, oh yes.

“From the Cradle” by Gene Wolfe

I was wowed like crazy by Wolfe's entry in Wastelands, and I'm excited to see it wasn't a fluke. This is just fantastic, a weird mix of sf and fantasy, kind of meta, but not in that clever-clever way that seems like literary masturbation. (I'm thinking of things like The Eyre Affair, and I'm sorry to say it, some of Neil Gaiman's stuff.) I tried to talk about what I loved about this story with my husband, and kept coming back to the way the pomo excise sometimes sacrifices emotion for form, and this doesn't do that. Wolfe can write like crazy too. His sentences are simply a joy to read, and I like how he blends the fantastic and the everyday in a way that isn't aggressively showy.

I itch like hell when fiction writers bring up Nazis, because, well, Nazis are inflammatory as hell, and they lend a sparkle of profundity even when it's totally unwarranted. But...this wasn't bad, Nazis notwithstanding. I like stories about Golems, too.

“The Hemingway Kittens” by A.R. Morland

Once, when I was a young, dewy lamb, I had a writing class where the teacher assigned a narrative wherein we all woke to find ourselves an animal of some kind. We all wrote, all of us, a story that turned out to be a dream, ending in a funny moment of revelation when we found the feather or toenail or whatever under the pillow or in our pockets. We sucked; our teacher yelled at us; we deserved it. This doesn't do that, exactly, but it's pretty pedestrian just the same. Some things happen, then some other things happen, and then some weird things happen. Meh. It may just be that I hate fucking stories about fucking cats. It's a local writer though, and the story is set locally so, hey, I can see my house from here!

This one I was really worried about, when I started it. I thought I could tell what the plot twist was going to be *cough* Wandering Jew *cough* but it wasn't that, it was something cooler. I suppose now is the time in my mini-reviews when I start worrying about all this fetishization of bookstores/books, because much as I love them...I'm not sure where I'm going with this. I don't think being a reader makes you a better person. I think most of us read to our biases, just like we watch news to our biases. If you have to choose between rescuing a book and a living being from a burning building – even if the living being is yet another of the bookstore cats that seem to occur in every single freaking story in the collection – you choose the living being.

“One Copy Only” by Ramsey Campbell

Now this was just mean-spirited. I tried to wink at this little story, and read it as a kind of dramatic monologue that skewered a world-view that I find absolutely abhorrent, but it isn't. The narrator finds one of those magic bookstores where they hold a single copy of books that were never written. I like this idea – and not to bring up Gaiman again, I like the way he played with idea in the dream library in Sandman. We all wish that our favorite authors would have written that one book: the one they were working on before they died, or were sort of flirting with, or whatever. Two books I wish had been written: the sequel to Octavia Butler's Fledgling, and the wolf-novel that Angela Carter was writing around in the years before she died. Also, later poetry by the John Keats and another book by Emily Brontë. Okay, the reality here is that there are thousands of books I wish had been written, or written better, or hadn't been lost by history or burned up in Alexandria or whatever. The 500 lines of extant poetry by Sappho is simply not enough; more please. But this story turns this wistfulness into anger, and then directs the anger at the authors themselves for having the temerity of needing to eat, and I cannot get behind that at all.

I don't want to put the knives in too hard with de Lint's stories, but I just want to cover my face with embarrassment every time I read his stuff. His stories are really loose, and have a slouching quality that's conversational & kind. He doesn't go for the big reveal; he's not trying to be clever; he's just telling some tales. I like that. But he's got these phrases that are the oral-formulaic of urban fantasy, and every single time someone's hair gets described as “like a pre-Raphaelite painting” I die a little inside. (Oh, fuck, also “smeared with paint”. Take a shower, girl!) Anyway, this one is about pixies coming through a computer screen and mucking up a bookstore in Ottawa Newford, and if that very idea makes you feel exhausted, then skip this. If not, then om nom nom for you. But not for me.

Ooo, ooO, a ghost story! Whoooo...ooooo! My mother, who is awesome, wrote for a local paper when I was a girl. (Hell, she still does.) For the October edition one year, lo, these many years ago, she was ordered by the editors to write a story on local ghosts. Being a rational-type person, she went out and marshaled her skepticism and heard the ghost stories of a variety of local folks. Some were obviously the delusions of people who'd gotten into a little bit more of the wacky tobaccy than is wise, but some...some were harder to dismiss. Not because the stories were more extravagant, or their protestations towards the truth of their tales more vehement, but because of the opposite of those things. The best ghost stories are told by deniers, who don't believe, but still tell the stories of their disbelief. The best ghosts are the ones who don't want anything, don't hunger for the living, but sit quietly and do whatever it is ghosts do whenever no one is looking, and then after the doings are done, just are. This is a nice tale. I like this:

“What a writer brought to a book didn't matter as much as what the reader contributed.”

And how. Mum still tells some wicked ghost stories.

This isn't really a story; it's a situation. That may be good enough for some, but not me. Also, in a collection about the magical powers of books, I'm not surprised to find one so explicit in equating democracy with the printed word, but I'm not excited about the way that mini-revelation is expressed here.

Another tasty treat. The protagonist gets 86'd from one of those magical bookstores that carries books that have have almost-but-never-have-been written, because he sees the writing as something that can change the shape of a life; how if you write it differently, you might not have your life peter out into all the pedestrian cancer and asthma and all the other boring and horrible stuff that will inevitably cut us down. Also, just a sweet sense of the way parents invest children with the love of reading, but here it's all sideways and upside down, because the writer understands that a life of only reading is a wasted life (sorry booksters) and that life is sometimes life. Or something. It's good though, really. A call to arms to waste your breathing on reading.

Boo. I saw where this was going, and then it went there. The end. And another big fat boo.

Now, this is interesting. I'm not often excited by the concept of escapism, because it seems so damn tired, so what you're supposed to say about your guilty pleasures. One upon a time, a million years ago, I helped a friend of mine type up a story because I'm an okay typist. She titled the story she was about to write “Hands in the Dark.” I knew she was trying to write something about her sexual abuse at the hands of her step-father, may he roast in hell forever, but it ended up being about fairies who befriended a girl who was lonely and afraid. Sometimes, when you have to escape in book, it's because there is something to escape from.

“I am looking for a Book...” by Patrick Weekes

Funny. Not mind-blowing or brilliant, but funny goes a long way in my book.

“The Glutton” by Melanie Tem

Forget all that stuff I said about Gene Wolfe; this is the best story in the collection. (No, j/k, don't forget him.) This was beautifully written, with a prose that hovered just on this side of byzantine, but didn't fall over. Beautiful, lingering character sketches that develop like photos in the developing tray; they ripple in red light. Magic is so often mechanical, following a set of rules. This does not; the magic is not. It's not really even magic; it's just story-telling; the magic of the way metaphors can cast your bones in plaster and set them at wrong angles. Lovely, upsetting, dark.

“In the Bookshadow” by Marianne de Pierres

This poor thing had to come after Tem's piece, but it really didn't suffer too much in comparison, which is saying something. I can see why they were shelved next to each other in this collection; how they both deal with transmutations. While many of these stories are told from the pov of booksellers, not many of them get the details of shopkeeping down right. (I never sold books, but I have kept shop.) This story is about those odd, lost souls who constitute the unwashed regulars any store will attract. You know the ones: the weirdos, the shoplifters, the mumblers. This story treats them with more kindness than I ever did, but then is also intensely creepy. Brrr.

Zzzzzzzz. *snort* what? Oh, sorry, this story was so predictable that I feel asleep a little there. Bad as it is, this story is notable because it's one of the few stories that take place in a chain store, and doesn't release a lot of bile and vitriol about the chains. I love, and frequent, a number of local, independent booksellers, but good gravy, there is nothing wrong with well-lit and organized, with a coffee shop by the front door. Sheesh.

Ah, Ellison. Pretty typical of his stuff: under-mixed and over-baked, but unmistakably Harlan Ellison. At some point in my life I read, like, everything he's ever written. (No, that's totally untrue; he writes something like 50 pages a day, and no mortal could ever hope to keep up with that. But I did read a lot of his short stories.) Anyway, this could use a hard edit, because there are things that jar and stab and simply don't work, but if it had one, it probably wouldn't sound like Ellison anymore. As your feelings towards Ellison in general, so too your feelings toward this story in specific.