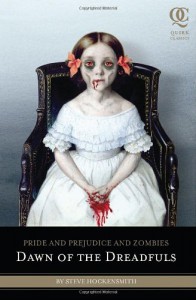 I heard this story once from a friend of mine – I make no claims to its veracity – about a guy who ghost-wrote an autobiography for some minor Playboy bunny/starlet. It was a good gig for a struggling writer: he spent some weeks organizing the depressingly non-sordid details of a woman's life that culminated in being publicly nekkid, banged out a manuscript (sorry, is this a pun?), and then was paid for the time and bother. The real bummer was that at roughly the same time, the book that he'd written – his real baby, the one he birthed laboriously with the usual screaming, love and bleeding that goes along with writing something important to you – was published to polite obscurity, and then vanished into a more complete obscurity. There were a few reviews, not negative ones, just indifferent, which has its own kind of soul-killing burn. Reviews of the nekkid memoir were good; reviewers were pleasantly surprised that Ms. Bunny seemed intelligent and funny. Maybe not needless to say, the intelligence and humor were solely the addition of the ghost-writer. “Huh,” everyone said. “I guess she's not the complete idiot we took her for. Weird.” Cue writerly melt-down, drinking, etc.

So now when I start in on some ad hominem attacks on Mr. Hockensmith, which I plan to do, with feeling, please understand that I have some empathy towards that broken wreck of a writer he must be, gibbering as he takes long pulls on a bottle of Jack, editing his unfinished masterpiece that will vanish without a trace while idiot readers such as myself buy shit like Dawn of the Dreadfuls. I am culpable in the vicious cycle that rewards publishers for pumping out garbage with good titles, great covers, and an originally clever idea that can be endlessly mimeographed into a purple-blue stew of endlessly derivative works. Android Karenina? Oh yes. Jane Slayre? Sign me the heck right up.

Steve Hockensmith is a robot. No, strike that, he's a committee of robots commissioned by the marketing department of Quirk books for the purposes of penning (keyboarding? coding?) a quick and dirty cash-in to the unexpected success of Pride and Prejudice and Zombies. I liked P & P & Z – what? It was fine, really, and my estimation of it has improved upon reading its prequel. P & P & Z, for all its faults, didn't betray its source materials. Seth Grahame-Smith, the author, clearly had read Austen's work, and read it enough to stitch in some zombie mayhem in places where zombie mayhem might be appropriate. (Although, really, the title should have read Pride and Prejudice and Ninjas because the best scenes – like Lizzie and Lady Catherine de Bough having a ninja throw-down – centered on the martial arts. Still, whatever, he meant no disrespect.

Hockensmith has never read Pride and Prejudice. He rented the BBC adaption which he watched on mute while talking on the phone. I'm not impugning this activity; descriptions of doing this very thing made Bridget Jones's Diary such an enjoyable read. I could, and at length, bitch about all of the violations and betrayals of Austen's characters and historical facts in Dawn of the Dreadfuls, but Elizabeth has already beaten me to the punch. So, I'm here today, my friends, to bitch about the zombies. As some of you may be aware, I have a thing for zombies. Even though I should know better, I bolt down all kinds of trashy crap just because it has some undead lumbering around in it. Om nom nom, as the kids say.

And even though I just went through this big apology for buying and reading trash fiction, I don't really feel all that bad about it, and I think maybe writing good trash is harder than it looks. Certainly there's no magic formula in the trash department, just like there isn't for writing non-trash, but I think probably writers should at least seem like they give a crap. Writers should have the tiniest respect for the readers for whom the $10 they shell out in the store is the smallest price they pay – the big cost in in the time they invest. Even in my skimmiest of readings, I'm going to give a book 2 hours of my freaking life. I'm reading this trash because I like both Austen and zombies, and when he disrespects both of those things, he disrespects me as a reader.

Mr. Hockensmith never figures out where his zombies are coming from, how they work, and most importantly, what they mean, which I'll go off about later. So, okay, the dead rise, just randomly, because it's warm? Fine. Then why is it also a contagion that can be passed on by a bite? And then why can you amputate the bitten limb and not zombify? So, one of those magical contagions that doesn't enter the bloodstream? This is getting into not-fine territory for me. I don't mind magic, really I don't. Pretty much any explanation of zombies is going to resolve down into magic because of physics and reality. But for crying out loud, have a little sense of craft, man.

But really, zombies are incidental, an excuse for a sex farce that includes things like Mrs. Bennet being mistaken by her daughters as a zombie when she goes scritch-scratching on the doors of Mr. Oscar Bennet's room so he can impregnate her with a male heir. There are more nut shots in this book than zombie kills. Which brings me to my next complaint: there are many conventions of zombie fiction, and sex farce is usually a pretty low one on the list. There's some good zombedies, but they, like the serious stuff, tend to rely on gross-out and gore over nut-shots and a bit with a dog. (This is why I rather liked Queen Victoria, Demon Hunter - the author there respected the gross.) I'm not saying zombie stuff should be sexless, but it's less slap-and-tickle and more icky sex.

So, fail on zombie mechanics and fail on zombie genre sensibilities. Now how about the zombie-as-metaphor? I don't expect Mr. Hockensmith to devote his valuable time nurturing an obsession with the undead. I don't expect him to write a treatise about how the zombies have their beginnings in colonial moral queasiness about the Caribbean slave-island nightmares they created and maintained – the original zombies were, after all, controlled by a Voodoo Priest, whose black skin, semi-Catholic idolatry, and ability to marshal people who lacked agency, autonomy and souls (read: slaves) struck to the heart of (British) colonialist fears. Slave uprising in Haiti, anyone? When Romero came along and skinned this rabbit good in Night of the Living Dead, he repurposes the Big Black Bad into the hero Ben, whose calmness, rationality, and authority allow him to survive the Marxist zombie uprising only to get cut down and hauled off by good ole boys. The revolution may be televised, but it's an edited version.

So okay, maybe Mansfield Park, with the Bertram family and their ominous-sounding “holdings” in Antigua, moral rot, and vapidity would have been a better fit for this kind of mash-up. Fanny Price, the heroine of Mansfield Park, is in some ways the perfect picture of a British Regency abolitionist – she's extremely principled to the point of being a moralizing prig, but she's developed those principles by being raised by a family who, it is coyly hinted, were slavers, who abused her almost casually, because their money, their lands, their status is built out of human cargo (which still stands as one of the most tortured euphemisms ever.) Still though, something could be said for the Bennets as a rising middle-class, mocked by the wealthy and titled for their familial relations who are *gasp* in trade, but hamstrung by both an entitlement system and their own spendthrift ways – Mr. Bennett - whose first name is anything but freaking Oscar, I might add – does say at some point in the real P & P that the girls wouldn't need to fling themselves at any passing man if he'd been a little more careful with his finances. Grr, arg, brains.

Anyway, what am I on about? Oh, yes, zombies. Zombies are about class, and race, and the hard economics that there are always more, and many more, have-nots than haves. Hockensmith seems to get this for maybe five seconds when he starts into a sub-plot where the Bennets lose face for training to fight the zombie hordes and then it gets them into hot water socially – maybe we'll get into how the middle class often pretends to itself to have the problems of the leisure classes – you don't think inheritance laws and “death taxes” have anything to do with you, do you? because they don't – while surreptitiously working for a living. (Actually, there's some cool stuff about law and the undead in Ian McDonald's Terminal Cafe.) But instead, some dumb plan to use some caricatured tail-chasing Baron to increase their standing is enacted, complete with more sex farce & nut shots. *possible spoiler if you still care* Cue Lady Catherine riding in on her white horse – I'm not making this up – and irritatedly saving Hertfordshire. Noblesse oblige & zombies, you can shove yourself up your own keyster.

Fail, fail, fail. I want to be entirely clear: I'm not opposed to trash fiction. I was fully on board to eat some brains and gross-out and squeal. All the stuff about slave uprisings and economics that I went on about would have been a bonus, but I wasn't hoping for that. Not everyone can be John Carpenter, tossing off garbage with biting social commentary. And apparently not everyone can be Seth Grahame-Smith either, and by everyone I mean Steve Hockensmith. I've been trying not too cuss to much in this review, but in sum, fuck this.