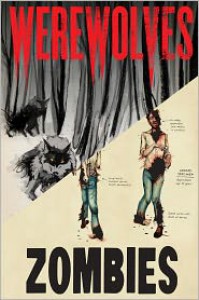 Truth be told, I haven't really been interested in reading much other than the back of the tonic bottle after pouring a G&T,* and I've kind of been wallowing in comic books and zombie trash when the mood does strike me. I'm not going to review even half of the books I've read, because so much has been chucked after a couple of chapters. Oh, you're that kind of zombie book, the nihilistic kind that's a thinly disguised screed of hatred towards modern culture? Toss. Or the kind that wants to say something about God(!)(?) in a superlame way? Chuck.

I don't do this much anymore - thanks GR! - but I found this at the library in the new horror display. I was there picking up other trash I had on hold, but omgzombiesnomnomnom. I got home from the library and my husband and I fought over who would get to read it first. He won. We took turns sitting out on the back porch while the other wrangled kids. It was brilliant.

This is a short book, read complete in less than an hour, and is like signing up to be punched hard in the arm. Unlike a kidney punch or a nut shot, it's not going to incapacitate you - the length more or less assures you can't get too invested in the characters - but even though you know the punch is coming, you still rub your arm a little. This is an odd format, because it's neither comic nor novel. The words are hand-lettered - it's supposed to be a bird-watching journal commandeered by the writer to document the zombie apocalypse. Sometimes this can get precious - like when the writer crosses out words and phrases that you can still see. You know: like people zombies or she it? I see what you did there, writer man.

I'm beginning to think that books about zombies will almost never be as effective as film because of the narrator thing - the first person account assures you the protagonist will live until the end, and narrows the focus; third person still tends to be tethered to pov chacacters; and true omniscience is too abstract and lacks viscera. Film doesn't have that problem, exactly. But we still like our heroes, because the heroes are us on some level, and I think the hero is maybe easier to conceal in film, or the hero is the viewer or something. I haven't really thought this out, and the G&Ts are calling.

I liked this little arm-punch of a book because the art was super-gross and had that arty-sketchy blood-drippy black-and-red quality that I like in horror art, even if it's a little cliche. I'm pretty sure there was a little visual reference to the zombie girl in Night of the Living Dead - the one who gave me the screaming heebie-jeebies as a teenager - and I love that. You know? This one:

Yeesh. I'm going to have nightmares just from the google it took to find that image.

Anyway, I also liked that there was a little pointed social commentary in the explanation for the zombies: it's a food additive gone nutso, maybe. The modern industrial food supply chain scares the crap out of me; good job tapping into that. I also liked how ordinary our survivor-narrator is, which you really notice when he runs into Buffy the Zombie Slayer in his little bildungsroman. (Maybe this is the wrong term - picaresque? with zombies? A story where you wander around and meet people? and zombies?) This Survival Girl is so hard and unlikely, so exceptional, so prescient that our little "I" feels totally human in comparison, and it's a nice commentary on the genre and it's reliance on exceptionalism as a character trait. Sure, a small percentage of folk will survive whatever horrible cataclysm, but often this comes down to dumb luck more than preparedness or paranoia. (Although, every time I go gadding around in flip-flops, I think, when the zombies come, I'm toast.)

So yeah. Cheers to you. G&Ts here I come. Omnomnom.

*The secret ingredient in the perfect G&T, and I kind of can't believe I'm divulging this family recipe on the aetherwebs, is aromatic bitters. Bitters are an old school cocktail ingredient, and originally the basis of tonic water itself. They taste great and turn your drink pink. What could be finer? Nothing.