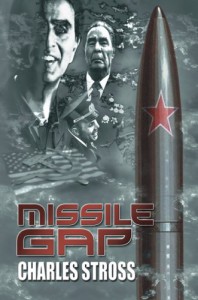 It turns out it was Earth all along, with the ruined visage of the Statue of Liberty rising in cold, Atlantic water. Damn you! Damn you all to hell!

Okay, immaturity aside, this is a pretty whizz-bang little bit of high-concept hard sf, with emphasis on the little. I recently learned about a category for the stupid Hugo called the “novelette”, which exists somewhere in word-count between the short story and the novella. I bet this is one, but frak if I'm going to do the necessary word-count. Anyway, this exists in a sort of quantum uncertainty of being too short to be really effective, but if it were longer, then it would fall apart. The last thing a high concept exercise should do is drag, and this does not, skipping lightly over such fun concepts as the flat-earth and the anthropic principle. It's 1976, in an alternate history, where at the moment of the Cuban Missile Crisis back in '62, the whole Earth was transported and laid flat onto a disc in a different part of the galactic neighborhood. Okay, groovy man, I'm all in.

The Cold War has played pretty differently, and I have to say, kind of stupidly. Stross does a pretty shit job of characterizing the Soviet deal, unless he were writing about Stalinism, which he is not, so lost points for that. Weirdly, I'm not sure he does a good job of characterizing the American side of the Cold War equation, but then mostly because he never bothers to lay it out, and takes it as a given that the reader will bring it. Again, it's short, and I'm really only noticing this now, once I've had a moment to think. I feel like I'm arguing with myself here, but hard sf has never really been known for its insightful social commentary & rich characterization, so I wonder why I'm bellyaching at all. But speaking of hard sf – we were right? Well, maybe just I was – I've always been left a little cold by it because it's so damn talky. Characters sit around and expound some heavy shit, which is okay by me, except when you put said heavy shit into the mouth of St. Sagan, whom I love to frakking pieces. Stross is being respectful of Sagan here, I think, but it still kind of irks me. Also, Yuri Gagarin has a prominent role in the book, and I have a picture of myself at his grave which I can't find, and maybe if I were Soviet I would be irked in the same way. Maybe this is intentional; who knows.

Anyway, I wish there more here here, because there's a lot of moving parts: flat-earth, alternate history, characters with the name “Gregor Samsa” in the Whackest Hat-Tip Ever department, and I feel like some of those parts stalled to the detriment of others. Fun though, if you want to squeal and giggle at the pictures – there's a really really funny one at the front of the last chapter – but probably only good for a hard sf beach read, which is how I experienced it. And now back to my regularly scheduled reading.