At least I have a new euphemism.

I feel like I should come up with some salient criticism of this fulking shite, but I feel a little broken by how fulking boring this whole enterprise is, so I'm just going to make ad hominem attacks and talk smack. Here's the really stupid thing: I'm going to give this towering colossal failure of a book two stars because of the new Skye O'Malley Assholist Rating System I devised after getting fulked by that book.

This book has just about everything wrong with it, for me. Maybe you are a different reader, and bless your heart if you like this kind of shit, but I hate it when people are named Jehenne and Fulk, and I hate when people named Jehenne are also nicknamed THE IRON MAIDEN, and I hate it when people named Fulk accidentally kill his brother because his brother has a glass jaw. (No spoilers, this stupidity happens in the prologue.)

Fulk this. I'm just going to go off on tangents. Anyone see the movie A Knight's Tale? I only mention this because there's a bunch of jousting in here, and jousting is the most boring and funny "sport" - these are scare quotes, not emphasis quotes - known to history. Boring because it's just guys homoerotically running at each other with poles, and funny for exactly the same reason.

There's a lot of stupid there, a lot, but I began to realize it's not so much suspension of disbelief as suspension of intelligence that gets you through shit like that. Also, hey, wft? Paul Bettany is playing Chaucer and look, the guy from Firefly! Also, awwww, RIP Heath Ledger. Maybe if Fulk had been portrayed by a well loved actor cut down in his prime. Wait, what the fulk am I saying?

Okay. So. The review.

I'm not going to talk about this book, mostly because I read every tenth page and have only the sketchiest of ideas as to what it's about. I came home today and asked my husband when the Iron Maiden was invented, because it had been bothering me a bunch while I was “reading” this book. (That's not an unnecessary quotation mark – it means I was skimming.) So he and I fall into a google-hole looking up Chaucer and the Gawain Poet and the Magna Carta, because before the 1400s is a little hazy for me, and this book purports to take place in the 1260s or so. So, turns out, the Magna Carta was signed in 1215, because of King John and all of the Robin Hoodings that went on during his reign. Interesting. Then we look up the origins of the Iron Maiden and this is where the wheels come off.

Okay, the source is wikipedia, but shut up, Internet.

The Iron Maiden is a Victorian invention, NATCH. There are some fuzzy descriptions of Iron Maiden-like contraptions, like a box described by Augustine of Hippo (!) - yes, that St Augustine - used for the torture and execution of Marcus Atilius Regulus, whoever the hell he was. It was a box, like a gibbet, that made it impossible for the person to sit down or sleep, and when he did, he got poked by nails and stuff. Wicked awesome.

All of the Iron Maidens that we think of, like this: are the fevered creations of Victorians imagining what the people of the medieval period were like. Holy shit, right? I mean, it's so Victorian an idea, and I'm kind of freaking out that I didn't see that before. It's so theatrical, so mechanical, so designed for display. I don't know. I'm no medieval scholar, but I have this impression that maybe medieval people were more results oriented. You need to torture a bitch? Then you just torture a bitch.

I would have said, with reasonable credulity, that the Iron Maiden was invented in the Rococo period, at the tail end of the Renaissance, in that weird promiscuous indulgence of the time. Once, when I was a wee lass, my mother took me to a German Rococo church that had all of these “martyrs” from “Rome” dressed up in outfits – again, not unnecessary quotation marks, they were just bones that some enterprising grifter sold the church as being from Rome, but who knows? Anyway, look at this: 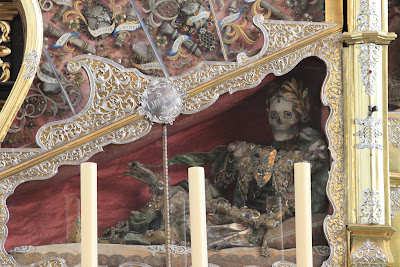 Arggghhh! So insane! Anyway. So. Back to the book, which I wasn't talking about. This book reimagines the 13th Century in the most boring, middle class of ways. There's some stuff about dowries and inheritances, and also about honor and stuff. Feudalism is some sort of quaint extended family; honor a bloodless table-game. Wait, I feel another digression coming on.

I also googled the dates for Chaucer and the Gawain poet, because I had this feeling that maybe they were writing in the same period, but then it turns out they were a hundred years later. I totally love the crap out of these guys, especially the Gawain poet, because their stuff is so solidly pre-Freudian. [b:Sir Gawain and the Green Knight|3049|Sir Gawain and the Green Knight |Unknown|http://ecx.images-amazon.com/images/I/5150FK8R8RL._SL75_.jpg|2954048] is this totally wacky exploration of honor and heraldry, and there's just endless descriptions of underpants and food, and guys unironically cutting each others heads off and delivering speeches. It's great. But I assure you that the Gawain poet would never write a bath scene so boring and lacking in sexual frisson, because he wouldn't be acting coy. No coyness! Balls out metaphorical insanity, yes; coy, bullshit attempts to desexualize sexual situations, no.

That's what gets me all nuts, I guess. Again, I know that this is just some shitty romance novel, pulled out of the burgeoning stream of shitty romance novels, but it pains me that history is made so mundane, so uninteresting. Every era reimagines the ones that came before to their own ends, and I can dig this. It almost hurts my head to think that the Victorians created the Iron Maiden and then this went into the sea of history, and I thought, modern person that I am, that such a thing existed before they imagined it. Beautiful, crazy, fulked up. But I'm still not through being irritated at how prosaic this vision of history is, how nonsensical and boring. I have no time for this. History, and people, are so much cooler that this book.