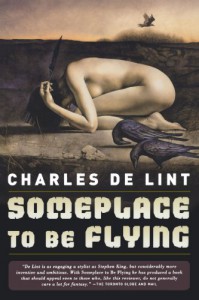 I've had uneven success with de Lint: I've loved short stories like "The Moon is Drowning While I Sleep," and have actively disliked novels like "Jack, the Giant Killer." This falls somewhere in the middle.

Taking place in de Lint's evolving city of Newford, an Ottawa-ish place with the drug problems of late-90's Vancouver, the story involves a group of poorly differentiated artsy types in the plots of "animal people." Animal people are, of course, Native American archetypes swinging about as jazz singers and hobos and the lot.

The problem with urban fiction is also its salvation. It's urbanity precludes elves and dragons and the usual sexist heroic fol de rol, but it's non-magical characters have to spend a great deal of time on the exposition couch exclaiming that this shit can't be happening.