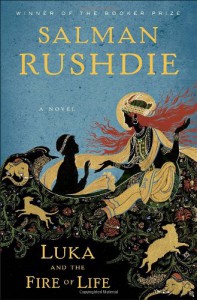 Weird. Firstreads let me win a book again! I haven't read anything Rushdie's written in the last 20 years - holy crap, has it been 20 years? - but I used to think he was awesome.

This book arrived this afternoon, and it's not even a proper book: it's got crooked tape for a binding, it smells like laser printer ink, there are printing artifacts all over the place, and I can see the hesitation lines where someone cut around the edges. I don't even know if it's possible for me to love this more than I do. I've picked up the odd uncorrected proof at used bookstores from time to time, but never something so rough and hand-made as this. I'm going to sleep with this under my pillow.

Rushdie's a weird writer, culturally speaking, because he's a ton more famous for being a writer than his is for writing. I mean, sure, he got the Booker for Midnight's Children, which certainly gets him some props in the writing department – depending, of course, on your feelings toward the Booker, and bitching about that prize is almost a booknerd sport – but he really became widely known because of the fatwa after he wrote Satanic Verses. I read Midnight's Children back in the day when I was in school in London, and it was an almost perfect convergence of place and time for me. So, sure, London isn't Bombay, and the UK isn't India, but I was writing my own creation myth at the time, and his creation myth of India/Pakistan had that kind of loose allegorical style that was just as interested in telling a story as it was in encoding history. It was angry at points, not that there's anything wrong with that, and too smart for its own good, sometimes, but it was a helluva ride. He pretty much earned my eternal devotion for using the word “defenestrate” without freaking defining it right after, indeed never defining it at all, and I love that about him. Also, I have an enduring love of Angela Carter – seriously, I follow her corpse-posts on facebook - and they were friends, and the introduction he wrote for Burning Your Boats made me cry. Why did she have to die so young?

Okay, I've cleaned myself up a bit after my Carter reverie, and I can talk about Luka. Luka is a sequel to Haroun and the Sea of Stories, which I've also read, but so long ago I can't really claim it anymore. Given how little I remember of Haroun, it's probably not necessary to have read it before this. You could almost class this as a YA book, if you wanted to get into a big argument about literary fiction and young adult and genres and all that, which I don't, so please keep that shit off the thread. (j/k). Anyway, Luka, Haroun's younger brother, goes off on his own adventure in the world of stories, of fairie, and it's a pretty standard myth-quest about a boy about to become a man.

I've been name checking the crap out of other books, but I really can't help it, and I'll just keep going. There's a lot in here like Neverwhere, or like Un Lun Dun, or sort of like Gregor the Overlander. That's okay; I think originality is over-rated. Unlike Neverwhere or Un Lun Dun, this book is not clever. This is not to say it isn't smart or generous at times, but it doesn't seem to have that aggressive need to show off that I think mars some of Gaiman's work. Like Gregor, the book deals with absent fathers, but in a much more basic, human way: Luka's father is absent because he's dying, and the death of parents is the most brutal absenteeism any of us with parents we admire will face. God, I'm getting all weepy again. I love you, Mum and Dad!

So, Luka steps left-wards, off into the world of his father's stories, into a quest to bring his father back from the edge of death by living those stories, and there's something really sad about it, even though the tone is pretty light. You pretty much know, because of whatever, because of storytelling, that this isn't going to be one of those books that stabs you in the kidneys and ends on a monumental bummer: Luka will prevail in the end. That doesn't mean that the specter of our parents' loss won't hang over the whole thing, because, really, that's the way of it. We reach adulthood in that final, irrevocable way because our parents have died. An orphan is the only true adult, and Luka may dodge that by enacting this narrative, but, well, it still just hangs.

Salman's getting old. I'm not going to bother googling his age, but I know from the quick calculus of how old I am, and how long I've known of him, that he can't be a spring chicken. Sometimes this shows in the the total pun-acolypse (pun-mageddon?) that occurs mid-book. I pretty much die when books go this way, and maybe this is personal tick, and maybe this is freaking objective freaking reality – it's the second, for serious - but puns feel way too Xanth for me to be comfortable. But, seriously, the thing that makes me feel all warm and fuzzy is that Rushdie is generous as all get-out about gaming culture. I'm not really a gamer, and Rushdie obviously isn't either, but he doesn't pull that old-guy shit where he intimates that kids who like video games are mental and stupid. Video games, Greek myths, personal hokum; it's all the stew of personality that makes up the psyche of Luka, and I dig like all get out that Rushdie can put these kinds of narrative in the stream of a life, even while I groan at how OTT a lot of the puns were. (And there are a lot of them while hinge on OTT - which is an old guy acronym for "over the top". Wow, I mean it's not just the low-hanging fruit, but fruit all the way up the pun tree with that one.)

So, well, I'm not sure how to wind up. This was an enjoyable story, written with the casual expertise of a master wordsmith, but it's still really casual. But, alas, some, maybe even many, of the revelations felt forced or trite. As an inveterate post-modernist, I would have expected from Rushdie something more...um...profound? more complicated? in the take-home messages in the end. Maybe this is me being lame and needy as a reader; the trite revelations are maybe more powerful than I give them credit. Death is scary; memory is the best way to honor a person; the mind is complicated and personal. Okay. I respect this, and I will sit by the fire next he spins a yarn, as his word-fire is banked and glowing. It is, as he would say, ott.