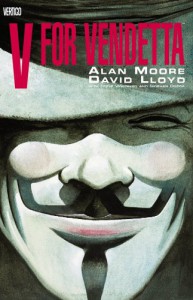 Hrm. Well. I wanted to like this more than I did, but it had several things going against it during my read. I read this mostly in bouts of insomnia during the last month, brought on by stress and holidays and the general sickness of my house. I was not giving this my attention, the way I don't give comics much of my attention, and this was a mistake. There's a lot here - a lot - but I was just too tired and spaced to grok it.

Which is too bad. There was a little essay by Moore at the back of my edition, where he talked about the process of creating this narrative, and I was floored when he pointed out that there is no internal monologue, no onomatopoeia - yes, I still need to google that spelling - all of the ideas are gotten across by dialogue - holy hannah. That is honestly amazing, not just in comics, but in word-fictions. Well, obviously, not just dialogue, also images, which is where some of my dis-ease comes from. I'm given to understand that the art here was done initially in black and white, and then colorized for a later edition. This is weird. It looks wrong, and I want to justify it, in that this is ultimately a post-apocalyptic vision, and the wash-out effect works for that, but then it doesn't really work for me. I think I would like this better in black and white.

I read this for a romance reading group, of all things, and there's actually some here here for that. Gender comes in a lot in this book, from the ambiguity of V's identity (both sexual and otherwise), to the crushing stories of the fascist smiting of homosexuality, to the weirdo weirdness that is V's relationship with Evie. I mean, obviously, they have almost the same name, and by the end have other commonalities as well, but the ways they relate, in this strange mix of parent/teacher, father/daughter, lover/lover - I just can't tease it all out. There's almost a romantic - or Romantic? - vision of the hero-poet, and his fawning lady-love. I didn't engage with this emotionally much, but the sequence, as a mid-narrative prologue, where V sings a song, absolutely slayed me. I felt the music, the fingers on the keys in an almost sexual touch, the nostalgia and the dream of performance. I still can't say anything smart about this - I feel like all I can do is struggle with my interpretation - but it's funny to me that an imaginary song, imagined music, killed me more than any other thing in this book.

I'm convinced that Moore likes to fuck with readers. The characters you are supposed to identify with, like V - because the alternative is identifying with the jack-booted thugs - are the ones you should look out for, because they will break your heart. This was all written long before 9/11 and the rhetorical fun that has gone on with the word "terrorist", but every time I read it in relation with V I did a shiver. It used to mean someone who used violence to political ends, and I have never ever been convinced that violence is an effective political tool. I could just be fat and middle-classed in this belief, and I have never had this belief put to some horrible test, knock wood. In terms of narrative, I get the pleasure of the sparkles of the explosions of symbolically evil institutions raining down burning debris into the night air. I get that. Like many things, I'm more interested in seeing them play out in fictions than real life, and then I start freaking out in the translation between imagination and action. I have no answers.

Honestly, what I really want is my husband to read this, and then we can argue the ideas here. I think this is a great conversation starter, an incredible piece of provocation and invective. I'm a fan of invective, and I'm pretty impressed by the character of V, with all of his smooth hair and ambiguity, even though I was damped by the drear of insomnia and influenza in my read. I'm going to read this again someday, and maybe I'll have something more intelligent to say.