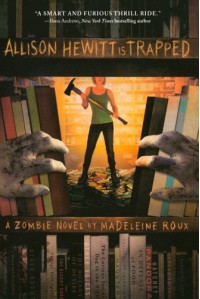 After my initial First Reads fiasco, I was a little surprised they let me "win" again! But they did! Yaaaaaay!

Allison Hewitt a first person narrative, natch, and the main character, who it might not surprise you to learn is named Allison Hewitt, is trapped in a bookstore where she works part time. It's set somewhere Midwestern – maybe Wisconsin? - and Roux does Midwestern smart-ass pretty well, and without a lot of cleverness and l33tspeak. I went into this with some reservations because of the format: it's blog posts from the zombie apocalypse. This is a really bad idea, something akin to the epistolary nightmare of yore, and doomed to looks as dated and stilted in about 15 seconds. While it may be a blog, but it reads like a diary, and the precious posts from other folk are kept to a minimum. Roux also has a just-graduated English major's penchant for title-dropping and book-devotion – there's a great scene where Allison nearly gets herself killed trying to grab books so she won't be so miserable and bored while locked in a room with her surviving co-workers. Girl after my own heart. But then, there was also one horribly hokey dream sequence where Alison gets high and imagines talking to Odysseus – I shall use this shiny English degree for something, dammit – but I just skipped it, and the plot continued unharmed.

Lots of zombie books are about fight scenes and gore, and the pleasures of the read are based on the skill of the author in creating a physical frission of imagining movement in the mind of reader. This is not one of those, and Roux keeps her zombie-fighting scenes to a minimum, which is good. There's one set-piece later in the book, and it wasn't handled well – I had no idea what was going on, where anyone was, or how they escaped – but that's pretty okay, in my book. She's much better at the interpersonal stories, at detailing characters that have motivations deeper and more complex than the usual zombie survivor cast. This is great. The early sections of the book have a really nice Lifeboat-ish sense of claustrophobia and neat little character sketches. Given how good Roux is at this, I'm still a little puzzled by the massive, dispiriting caricatures Roux wrote in the characters of a group of survivors known as the Black Earth Women.

The Black Earth Women seem to be modeled after those Mennonite communities you can find in cities in the Midwest (and maybe elsewhere). The Amish were an offshoot of the Mennonites, because the Amish wanted to be more of a drag and practice shunning. (I don't really like the Amish much, and am irritated by all of the crass fetishization of their “lifestyle” in some forms of popular entertainment. This has nothing to do with the book.) You couldn't call them a cult, exactly, because their communities aren't formed around charismatic leadership, but they are religiously based and pretty insular. The Mennonites tend to be pretty massive pacifists and committed to social justice, but then they hew to gender roles and stuff that are unworkable to me. They're complicated. I don't pretend to understand them.

Anyway, these Black Earth Women are the remnants of one of those communities – the men all killed getting the women and children to safety. And the Black Earth Women are the worst kind of barfy stereotype about religious housewives, the kind that doesn't actually make a ton of sense. I feel like I need to clarify: I'm not a huge fan of finger-wagging moralists, and there are tons of those to be found in communities such as these – hell, in communities anywhere in the Midwest. I was on board when Roux just made pot-shots at this kind of thing, leavened with a little sympathy – there's a very small harrowing story about how two children die which is too gross to recount, and how the mother is broken by this. And I think a bunch of gossiping fanatics are genuinely scarier than zombies – true facts.

Then the story of the Black Earth Women goes totally insane, and they start doing all kind of character-violating shit that I thought was more about some kind of domestic panic than it was about moralists and what a drag they are. Honestly, I have no idea if the following info, delivered mid-book, is a spoiler, but you can skip it if you're worried.


The Black Earth Women start abducting men so they can get themselves pregnant and repopulate the Earth with perfect children. And they want the men to fuck them in a big daisy chain. This is T+one month after the zombie apocalypse. What? No. That is total fantasy land. Yes, I think there can be something deeply perverted about these kind of insular, self-pious communities, but I do not believe that perversion would ever be so ridiculously overt or explicit. Moreover, and I'm not trying to get into trouble with this statement, but I might, it's the guys in cults that you have worry about being sexually deviant. Name me one cult that has a female leader who is banging a herd of disciples, other than Ayn Rand. Admittedly, this is a zombie novel, so you could come at me with the idea that it's all a fantasy land, so I should just cool it. Roux is better than this though – she's pretty good at drawing characters – so it's weird to be confronted with a bunch of cartoons. Allison literally cannot tell these women apart, confusing their names, and none of them ever seems to have a real motivation.


This is neither here nor there, but I think the way housewives get treated in a lot of these zombie stories is a little weird, and I'm thinking now as I write that maybe there isn't something in zombie stories that's punishing of domesticity. (I'm thinking of the housewife narrative in World War Z and the cult leader lady in Married with Zombies. And the catatonic Barbara & the shrill wife in “Night of the Living Dead”. I could go on, but I'll stop.) These shrill, hysterical, insane, catatonic, and/or irrational women are the danger within the safety of the survivors, unable to make the judgments necessary to survive, unable to enact physical violence, always worried about TEH CHILDREN in a way that makes then dangerously unstable. I mean, I don't want to draw the line too hard here, because mostly I think this cult group is supposed to be a counterpoint to the dangers of the mindlessness of the undead; it's the mindlessness of the living. I guess I'm just bummed out because I think this counterpoint could have been made better, without relying on such obviously impossible actions by characters who don't violate the laws of physics, but of motivation.

This book really starts better than it ends, come to think of it. I was really in love with the beginning, especially the really moving parts about Allison's mother, out there somewhere dying of cancer in the chaos. Sometimes zombie stories don't pay that much attention to death, and how terrible it is: the wasting, the panic, the sitting in the hospital all helpless and afraid. The zombie animates this fear, and walks it groaning through the streets. There is a real fear that our loved ones will die, and that their deaths will destroy something vital in us, because they do. The cancer wastes more than our bodies. The boringness of hiding, tapped, and waiting to be eaten by the dead is a pretty brilliant analogy for watching loved ones die of wasting disease. Much of the mother's story is abandoned though, and I don't think this correlation is made explicit, which feels like a wasted opportunity. I feel like maybe the plot got away from Roux, and she shied from the real horror embodied in zombies.

And, oh, one zombie nit-pick. Someone gets zombified due to a zombie squirrel, which makes me super crazy. I hate zombie animals so much I can barely talk about them. I read Monster Nation all stupidly once. I never even wrote a review because that shit pissed me off so bad. If animals are zombifying, there is no freaking chance. It is game over, and time to put the girl in charge. There's some chitter chatter about zombie fish in the ocean, which also makes me insane. I am having a hard time articulating this my annoyance, but something about the study that shows how unstoppable zombies would be if they were only human. Once you add animals into the mix, who cannot barricade themselves in a book store, then the planet is fucked. Also, live mice are enough of a menace; undead ones will get in just as easy, maybe easier. Then can there be zombie insects? Zombie plants? It just gets unworkable fast. This is just me though, and I am aware I am irrational on the subject.

Oh, and I hated the coda. A lot. I choose to think it didn't happen, so it didn't. I don't want to end on a negative note though, because I liked this, despite its failings. Roux gets a lot of things right, and many of the things she gets right are important ones: character (mostly), voice, pacing. You can read it in a second, and will have fun doing so. Allison is a fun character, and Roux's writing is enjoyable to read. I look forward to what she comes up with in her next book.

Also, I'll mail this out to the first person who wants it.