Sometimes there are no words. I'm about to spill whatever five paragraphs of peripheral anecdotes, personal memoir, bullshit and talking about this book, but it's not going to do a damn thing. Obviously, I enjoy the review process, hitching my verbal cart to other words, putting the layer of reader response up between the text and the reader. Sometimes the futility of that makes me me feel weak with. Weak with. Weak with something. Weak with the fact that I might be able to drive some of you to read this – this is my fervent hope – but not enough. And weak with the fact that some of you will not love it like I do.

I'm not Irish. My family ethnicity involves a lot of hyphen-Americans, the closest of which is Welsh in its Celtic convergence, but none of them who steamed over from the wars and dirt and poverty of their lives in Northern Europe – no immigrant leaves the mother country because things were good – and most of them ended up in the dirt and wars and poverty of America were Irish. At least it was a new dirt and war and poverty, is the best I can think of it. Johan Paulus, who became John Paul, fled the Franco-Prussian War in Germany to land in the middle of the American Civil War, shoveling coal for the Union in an ironside towards his citizenship. He got it, and then took his martial/industrial skills as a fireman – that's the kind of fireman who runs a coal-fired furnace – and slunk down into the belly of the steel mills in the river towns of Pennsylvania. He had 13 children and died in a conflict between strikers and U.S. Steel. I'm not Irish, but this song speaks to me.

My father's Grandfather emigrated from Denmark. He came because of religious intolerance, but not the kind that most think of when they think of it. Puritans left England because they wanted to be more religiously intolerant; my great-grandfather left because he couldn't stand sitting cooped up in a Jutland parlor on the Sabbath not doing anything in accords with a Gospel so rigid it swathed them all in black wool worn next to the skin. He found Iowa, fathered children. His beloved wife died of childbed fever after the birth of his last daughter. My grandfather was 6. My grandfather spent the summer before learning to play the piano with his mother, she growing more and more pregnant. When my grandfather was an old man, at the end of his life, his memories erased by senior dementia, he retreated to the piano, playing over and over again the songs learned in childhood.

The immigrant experience is a hope translated, and so much is both lost and gained in that translation. The immigrant runs from home for a lot of different reasons, but often because something is coming. Here, the something is a shadow of a tentacle of the night sky, or occult industrial machines sucking people up from the ground. The drawings - which are not rightly cartoons, more illustrations - are in black in white, with a photographic sensibility to them. Any one of them could be cut out and put in your family album and you mught not even notice at first. 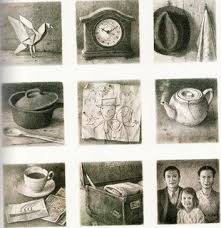 When he was was in his 60s, my great-grandfather, my father's grandfather, drove to a hill in Iowa, snaked a hose around from the exhaust pipe of the car and into the cabin, and started the engine. There was a shotgun in the passenger's seat, just in case, but it wasn't necessary. There was a note, but no one knows where it went, and the people who read it at the time are all dead. The words are all gone. All gone. My father was named after his grandfather, and he didn't know until far into adulthood the circumstance of his naming; the shame of his grandfather's death. He tried, hard, to find this meaning, but it's elusive. There's no pat coda on this story; there will never be.

This story makes me weep; makes me wonder if it's even a story; makes me question the idea of story at all. Things happen in a logical sequence: a man leaves his family, and then finds another land and works his way through the hard, inescapable misunderstandings of a new country. There are words in this book, but they are words written in the cipher of the illiteracy of other languages. And there is a wonderful surrealism, animals never known to the earth nuzzling the hands of people unknown to the streets of a new country. It's amazing to me that Tan created an immigrant experience so stripped down, so - and I normally can't abide this word - universal. It's even more amazing to me that he did it without words. This story ends better, in some ways, than the immigrant stories I have in my own history: my great-grandfather on a lonely hill, suffocating; my great-great-grandfather burned to death while the boilers explode. But I'm here. I'm still here. And they were there, and then they moved across the water and were here too. Amen.