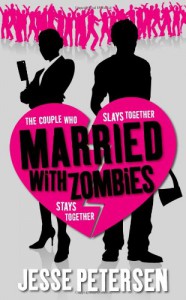 This poor book. If I had written and posted my review when I read the book, it would have been full of a bunch of !!!! and SQUEE. I had very low expectations going in, and read it on a plane, where I have a much lower standard for enjoyment. A short list of things in favor of this book:

1. For dropping the f-bomb on the second page, and for general cussedness throughout the book. Marriage, and the zombie apocalypse, are not times to mince words.

2. For killing a zombie with a toilet seat. I find the whole toilet-seat-up-or-down debate that goes on lame beyond the telling of it, mostly because I think everyone should completely close the throne when not in use. It has a lid for a reason; use it.

3. For having no descriptions of sex of any kind, especially not corpsesecks. Every.single.person I told about this book before I read it asked me if it had zombiesecks in it, and then gave me a look like I was gross for reading it. I am not gross! Nor is this book in that way.

But, hrm, I was coming at this novel as a romance novel, where my standards are super low because it's entirely not the genre for me, and I know that. Married With Zombies is a whole lot less romance novel, and a lot more romantic zombedy, and it's in the mash-up where I think this book both succeeds and fails. So, our main characters start the story bickering on the way to their marriage counseling session, and it's some good bicker. They find their marriage counselor eating the corpses of the previous couple and that's maybe the best thing ever. From here they bop around trying to survive the zombie apocalypse, and I truly, earnestly believe the take-home message is that any marriage can be worked out if the couple can kill every last ever-loving person they know. I don't want to get too *spoiler alert*, but seriously, if you are with a couple like this in the zombie apocalypse, start looking for an exit strategy, because you are next. Om nom nom, bitches.

Sorry I'm about to get all weird and serious, but I think there is something perfect about putting together a zombie narrative and the romance novel, because both are narratives of narcissism. (When I say perfect, I'm being a little bitchy.) Much as I love me some zombies, I'm also bothered by how often these stories hinge on narrative exceptionalism, where the main characters survive and thrive only because they are main characters, and author-proxies, and reader-proxies. Not good enough, if you want to be a human being. I've taken the facebook quiz about whether I'd survive the zombie apocalypse, and I did fine because I answered assuming I'd throw everyone under the bus. I wouldn't though; that's just wrong. The same thing could be said of romance novels, in terms of narcissism. If you take a step back from the swooning and sparkling, so often the main characters of TEH ROMANCE are creepy sociopaths, who stand up to the impediments to their union using self-involvement. Here it's kind of perfect: love is just another word for no one left to kill. I've always though that romantic love is terrifically anti-social: love doesn't give a good godamn about race or creed or gender or whatnot, but romance novels seek to contain that fucked up crazy force, and siphon it into marriage and bab*es and happily ever after after. The HEA is a cabin filled with supplies and a gun that doesn't jam.

So, that's where this book fails for me, ultimately. If you take it lightly, it's mostly fun, but the minute you stop and think, you realize that the main characters are incredibly poorly sketched – like, I have no idea what this couples' genuine problems were, and they got over them through murder and driving around a lot. Okay. The zombies are a little nonsensical – they have a period of lucidity right after they turn that's poorly played, and a contrivance for a scene that should have been cut. But it's bothersome, very bothersome, to me to have to care about people who have not proven to me I should care. Zombie narratives often pull the “omg, but maybe the living are the monsters” card, which I often sigh about, but it's not such a bad message, really. The central couple here is monstrous in a way, blundering through this story with their protagonist invincibility, dispatching their marital problems and everyone in their paths with a lack of affect I find troubling. You know the whole funny ha-ha idea? This book goes for scary ha-ha, and hits ha-ha scary, and not in the way it intents. Shoot, now I've bummed myself out.

Really, though, it's worthwhile as a plane read, and fine if you give it no thought. In fact, I blame Goodreads for making me think about this stuff long enough to write a review, and myself for waiting a month to write this. I'm still on the fence about rating this, but I'll probably go for three, just because of certain zombie sock monsters who were with me for my read.