I wanted to come in and say that the writing has improved, but I'm pretty sure it's not that, exactly. Moning continues to do things that frustrate me, the prologue being the worst of her sins, imao. The prologue here is as least partially justifiable, given that it's the second book in the series, and recap may be in order. (Although, seriously, why would you pick up this series in the middle? Assume we read book one and go on.) The prologue also showcases a writing technique that has always bothered me inordinately (though it might not bother you):

The writer writes a bunch of choppy sentences in simple declarative form, telling you the facts of the matter.

Then she reverses those facts in a short sentence, to heighten tension.

But well, we gets these sins over early and then everything's all dark dark darky dark, murder, torture, mayhem and vengeance. Darkfever, the first of this series was, for me anyway, about grief; this one is about revenge. MacKayla learned in the last book that her sister had been murrrrdered, that fairies are real, and that they are out to get us. She also learned who her sister's killer was, although it's entirely possible that she's made a leap in logic, and who she thinks is the killer is not.

That's not of concern though.

She is out for blood.

Revenge can be funny - I think Inigo Montoya taught us that – but mostly it's just awful, a rabbit hole of morally ambiguous choices that get less and less ambiguous and more and more wrong as time goes on. Our fluffy headed sunbather and all of those descriptions of pink clothing from the first book have gone out the window while the window was still closed, and the blood-tipped shards of glass are raining down into darkness.

I've always held that whether I like this sort of female-protagonist-driven popular fiction hinges on whether I like the main character. Bella = hate. Kitty the Werewolf = like. Sookie = clueless. This series is complicating that smart ass statement. I can't say I like Mac, though I do not hate her. While she may be frustrating at times, mostly she feels like a person, one that's a bit of a mess the way people are. And it's much more interesting for me to read about someone real and flawed than it is to read about someone perfect and likable. And even better: she seems be changing and growing as these books go on, not in a linear progression, but in stutters and stops and retreats. Pretty great characterization, all told.

There are slips for me, like when Mac/Moning falls into mini-lectures that don't make any damn sense for the character. The one I remember most clearly is one about “hook-up culture” and all you sexy kids these days, which comes just pages after an anecdote about Mac's sister pointing out some balled up underwear in the hem of Mac's pants, saving Mac from getting busted by their folks. It's entirely possible this is just first person cognitive dissonance – how we lie to ourselves about our own actions, and judge others according to standards we do not adhere to – but I doubt that. Maybe Felt to me like authorial intrusion.

Anyway, so I don't necessarily like Mac, but I may have a thing for girls kicking ass and beheading stuff. Just a little. Mac does a serious amount of ass-kicking, and the very cool thing is not all of it – maybe not even half of it – is a wise ethical choice. This is about vengeance. Murdering everyone isn't going to bring the sister back, but, boy, does it feel good. That doesn't reflect well on anyone – not me, not Mac – but it's pretty groovy that Moning keeps her eye on this ambiguity and doesn't let us have the murderous thrills without the reminder that that might be kind of fucked up.

One last note: Barrons. Well, Mr. Growly McHotpants, let's talk about you. I honestly like what a dick he is, and how little Mac puts up with it. I am consistently troubled by how often he bruises her arms though – seriously, asshole, get less of a grip – and then there's the small matter of the time he ties up Mac while she is in her bikini. I admit no small affection for certain chained up girls in gold bikinis: 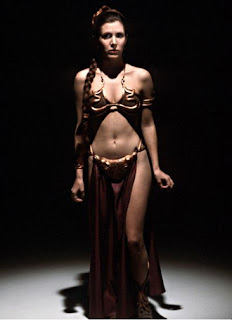 But I would be remiss if I didn't point out that Leia strangled the person Hutt to death who put her in those chains in the first place. Still though, Barrons is growly and mysterious, and probably worth a pretty serious spite-fuck.

I took my own advice from the last time around and read this in the middle of the night when I couldn't sleep, so I'm looking forward to my next bout of insomnia and book three. Yeah, that's a little weird. It's probably best to read this in the dark anyway. If the pattern holds, the next book will be even darker. Here's hoping.