Warning: there's some cussing and sex-talk in this review. If you don't like that sort of thing, you will not like this book in any way. Move along.


My opening wiseass salvo is that I'm pretty sure Alan Moore decided to write Lost Girls as pornography to stick to all the filmmakers who have hosed his comics in the past. Try to make this into a summer blockbuster, Hollywood! Muahahaha. There's something charmingly retrograde about hand-drawing pornography in a series of different artists' styles, mixed in with dozens of literary allusions, historical events, and whatnot. Alice, Dorothy and Wendy - from the children's fictions associated with these names - meet in an Austrian hotel sometime in 1914, and, well, it's pornography, you can imagine what happens, in every single permutation possible.

Anyway, I'll try not to be too embarrassing to me and mine. I am absolutely entranced with this time period in history: the end of Victoria's long, stable reign, which is nonetheless characterized by the filth and degradation of the Industrial Revolution; the elderly, doddering, liminal period of Edward's rule, as capitalism subsumes the monarchy; Nicholas and Alexandra locked in their family psychodrama of bad blood and strange religion, the effects of which are written all over Russia; the grand, stupid, complicated assassination of Archduke Franz Ferdinand which sparks off the war that superlatives can't even begin to describe. It's so lost to us now, this period, because The Great War so completely decimated the ways of thinking that went on before the War. It's the break of Modernity, and while we can stretch the threads back to Romanticism and the Holy Modernist Trinity of Nietzsche, Marx, and Freud, the threads are stretched so far they're about to snap.

Anyway, so there are parts in this book which make me freak the fuck right out, the way it would layer the explicit with the implicit, the way some of that Victorian stuff is so freaking coded, so repressed, so squished out the sides. Like these photos, taken by Charles Dodgson, who wrote under the nameLewis Carroll, of Alice Liddell:

I don't even want to put too pat a Freudian an analysis on these photos. Alice always denied anything weird in her dealings with Dodgson, and I am willing to take her at her word, but you can see how kinked they are, right? I can't tell if I think they are kinked because of where I am historically, like if Modernity has created a way of seeing kink that didn't exist in exactly the same way, or if the kink is something a Victorian would see too. Maybe that's a stupid thing to worry about.

So, Alice, Dorothy and Wendy are busy fucking their way through the hotel, and there's a pornographic book that's been placed in every room, so that many of the sections are intercuts of Gebbie's enthusiastic renderings of humpings with spot-on ventriloquisms of both artists and writers of the day. This is a really Alan Mooreish thing to do, and he does it well most of the time. The sections that used Oscar Wilde and Aubrey Beardsley were freaking amazing - the cuts to plagiarized, imagined passages of Dorian Gray while the ship-builder and the soldier buggered one another - honestly, this was something akin to poetry. There's something wildly funny about using Wilde, the Patron Saint of Literary Buggery, as the subtext on an industrialist and a soldier doing it to one another. There's other humor here too - a shadow sequence, a series of increasingly gross and disturbing puns. I assume these are Gebbie's doing, because Moore isn't that funny usually. At least to me.

(And there's visual references to another artist whom I can't identify - someone who drew these long, lean dull-colored bodies with hard charcoal outlines - even though his name is just there on my tongue. It's making me crazy that I can't remember though, and I can't figure out how to find out. Someone remember for me, please.)

Another thing that's making me nuts is that I can't find my copy of The Birthday of the Infanta, which is a book I had as a child, written by Wilde and illustrated by Beardsley. I can see bits of it still, flashes:, a spoiled child, a dwarf, a possibly contaminated memory of the Infanta smacking one of her rivals with a thorned rose, the hand going up to a cheek in surprise. I went looking for images from the book, and found all kinds of crazy Beardsley stuff, most of it I can't reproduce here on GR because of their anti-boobies policy. But here's some Beardsley that still flips me out, sans boobies:

Godamn it. I found some great Beardsley images - some even from Infanta - but they were all on some freaking Czech attack site that crashed my browser, and I will not be linking to them.

I can't say because I haven't found it and looked, but I think there's something really interesting about tossing The Birthday of the Infanta in with kids' reading - hi Mum and Dad, again! - because there's this weird notion that any book that has pictures in it is for children. Once you throw pornography into the mix, that idea get untrue fast - pictures aren't always appealing to our innocent youth, and sometimes our youths aren't as innocent as adults like to make out, etc etc. That's the hinge of this book, I would argue. I mean, look at this: 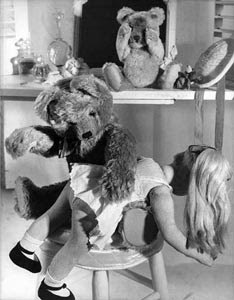 I've already gone off at length about Dare Wright and the insanity, beauty, and ravagement that is The Lonely Doll, but I think it's important to note the psychosexual weirdness that sometimes goes on in children's fictions; the hinge of childhood, sexuality, imagery, Modernity, which pivots with such strong force through this and so many other works. I mean, people are still drawing underpants on Mickey as he falls, nude, through [b:In the Night Kitchen|95144|In the Night Kitchen|Maurice Sendak|http://ecx.images-amazon.com/images/I/61isGF2Oh9L._SL75_.jpg|2223682]. It's terrifying that children have bodies, that they will grow into adult bodies which will enact adult acts. Whether or not children are sexual beings - I think they are, which is just my opinion - it inevitably takes sexual beings to create them. (Seriously if someone brings up some technological fucking insanity where some nun became a mother, that's fine, but out of the seven billion people on the planet, that is statistically insignificant, and moreover, totally whack post-Modernism in and of itself.) It's funny to me, because it's somewhere between brilliant and utterly hackneyed to point these things out, and this book sits in the uneasy calculus between the two.

And also, a quick edit: I though more about the children's fiction thing, and another thing that blows me away is that our modern notions of childhood start in this time - and Wendy, Dorothy and Alice were part of a new and growing genre of fictions aimed at children exclusively. I'm not trying to say that childhood never existed, but until the rise of the middle class, childhood wasn't so calculated as a garden, an idyll, encircled with walls to keep the adult out. And the Wendy story here in Lost Girls explicitly - har har - takes on that newly constructed middle-class garden of childhood - the lost boys, who are the orphans of the industrial revolution, left to their own devices by parents who were too busy being ground under the boot of capitalism to "parent", which is a dubious verb at best. (Please note when I say "too busy" I'm being a little bitchy - so often parenting texts spend all this time castigating parents for being inattentive, when what they mean is "stop being so poor".) The lost boys climb the walls of the garden, because they always will. Of course Birthday of the Infanta was tossed into the mix of my childhood books, and God bless both my folks for doing so - hi Mum and Dad! Dad was feeling a little hurt by my review, like I'd called his parenting out, which is fucking hilarious on so many levels that it hurts.

I don't want to sound like I'm all unreservedly ga-ga about this. Like anything calculated to push one's buttons, so to speak - ahem - there are going to be many moments that miss the mark. I got to a point where I was like, ho hum, cocks, which may be the point, but it's still ho hum to get there, paging though endless permutations of this protrusion and that hole. Sometimes the points were so obvious - I mean, even the set-up is intentionally provocative - that I'm all like, yeah, okay, I get what you're doing there - tee double you ess ess.

Just a quick end-note: I've wanted to read this for a while, since it came out, really, and read a bunch of interviews with Alan Moore. Holy God, is that man insane. I mean, really, he's nuts, but seriously compelling. But this is not something I could find in the Hennepin County Public Library, for better or for worse. (Insert some argument here about that. Becoming too lazy to do so.) But $50 is a lot of money for some fairy porn that I may not like, so it wasn't until the Death of Borders sale that I finally picked this up.