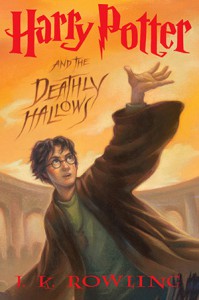 I've read all of the Harry Potters twice except for this one. I read them as they came out (I think starting at the third because I'd missed the Pottermania up to that book), and then after the sixth, in a fit of perversity, I read them all backwards. Not the books themselves, but in backwards order. I recommend that; it was fun. You see certain foreshadowings you hadn't been aware of before. Anyway, so I got to this one, and I was fully engripped - so I made that word up; shut up – in all the hype insanity of the time. So I didn't stand in line at midnight and read all day, but I did go to an event put on my the public library, a concert by Harry and the Potters. Harry and the Potters are freaking adorable, a coupla kids who loved these books so much they had to write some rockin' tunes to the books they loved. They played a local high school's football field until the generator ran out, and I got a boss tee-shirt that reads “This Guitar is a Horcrux.” Yay, baby.

Anyway, then it turned out I was one of those crunchy old grown-ups who thought this book was pretty disappointing. The deaths are ticked off like a metronome; the first third reads like Harry Potter: Bickering While Camping; the exposition is so freaking hamfisted and infodumpy that it's embarrassing to see from a novelist of Rowling's experience; the prologue mawkish and blarg. (Yes, the MLA accepts blarg as an adjective.)

So at some point in the last five years I was at my mother's house for a cook-out, hanging around with her professorial buddies. Mum was an English professor forever, and a lot of her friends are colleagues, fellow practitioners of the Dark Arts of English. I fell into a conversation with them about Harry Potter. Most of them had never read any Harry Potter, which made me get all reverse snob about their lack of populism. Seriously, you have to read this stuff if you hope to reach the kids coming up through the grinding system, I cried. But, of course, I says, I was pretty disappointed by the last one. Too much bickering while camping, I says. I sipped on my chardonnay.

Then one of my mother's friends who had actually read Potter read me the riot act. Like, full on, she destroyed me. I can't hope to relate her destruction of me here, because it was a while ago, and I was too busy being destroyed, but the gist was this: you have missed the point completely if you think the time Ron, Hermione and Harry spent bickering in the tent was just stupid and boring. That was the crux of the whole thing, the horcrux, it's where the soul lives in the story. I crawled away, decimated, unable to retort. Frankly, I read the thing too fast, too bleary-eyed, to come home with anything more than a catalog of events, tumbling towards the conclusion we were all gagging for when this last book came out. I knew what happened, and that was all.

So. I got sick this week. I couldn't hope to read the book I'm hacking at, with it's tricksy new words and difficult whatnot. One needs the clean, unadorned prose of the young adult when one is sick. At least this one does. I read, clutching my belly and moaning, the first third, the third with the bickering and camping, and I get what my mother's friend was on about. I don't find Deathly Hallows pretty disappointing, just kinda disappointing. Not overwhelmingly, not crushingly, just kinda.

But here's the rub: Deathly Hallows breaks the conventions of the last six books, breaks them in a way that makes sense to me now. Unless we are teens – and shouldn't we be vandalizing or pirating music instead of reading if we are? – we all left high school and walked into the horror of real life - “real life” - without a soul to guide us. Yes, maybe tons of people bent our ears and warned us about what was coming – the workaday, the responsibility – but we didn't listen. That's what we do when we matriculate, build a tent in the forest full of purpose and intent, and surround it with muffling charms so we don't have to hear a damn thing anyone else says. We are the Chosen Ones! We will fight...something! We don't even know what that is! Frak you, old people, you have lied to us because we weren't even listening! So, they bicker, those kids, and it was the bicker of the phone bill coming and having to be divided between three people who have never been confronted by a phone bill before. What is this arcane magic?

There other thing that really really worked for me this time through was the last confrontation between Harry and Voldemort. Very early in the novel, someone yells at Harry because he disarms a Death Eater instead of killing or stunning. "People are beginning to think of Expelliarmus as your signature move." And it has been, really; Harry has almost always thought defensively, staying alive through concealment and the protection of community. It's so wonderful to me that Rowling did not train up Harry as a soldier, awakening more and more magical abilities, growing into a towering badass through a series of musical sequences. So when Harry lets the Elder Wand go by, I cheered a little. When he plays possum and fights through disarmament, and it bloody well works, I was so happy. I've been known to eye-roll at this sort of thing, but I do still appreciate the power of love, love, love, baby. That is was actual love, and not some enchanted sword with the word "love" engraved on the handle, that makes it even better.

My criticisms still stand: there is a lot in this book that could have been better written, like the confrontation and explication with Snape which is only retrospective. That could have had a ton more frission if it were...if something. If anything. If Harry and Snape could have had a moment alone before the horrible hammer drops, that would have been something. Lupin and Tonks, I have had a hard time giving a crap about their crisis through the last two books, and their deaths felt cheap to me here, too determined, too something. And I am still keening for Hedwig in a way that I felt wasn't respected in the narrative. This may be a crappy thing, but I feel the death of animals more strongly. As much as we anthropomorphize them, they do not have a choice. Dobby though...holy shit.

I kinda want to get into a bunch of complaining about the Deathly Hallows, because, structurally, they feel tacked on and needlessly confounding, like the author – cough cough – had read too many Internet speculations that nailed where she thought she was going. That's more or less true, I think, that Rowling felt she had to introduce epicycles in her star charts to make the cosmology work. Maybe it's not enough to make Harry the last Horcrux, his soul twinned with the Dark Lord, the unspeakable Adult who values his mortgage over TEH CHILDREN, but I think it probably would have been, especially because the Hallows are first mentions on the 400th page. The Hallows seem to me a vehicle for Harry to work out his Oedipal crisis with Dumbledore - maybe Oedipal is too strong a word, but Dumbledore has certainly been in loco parentis for Harry for much of his life. And as much as I've always admired Dumbledore, he is a distant and withholding parental figure. But without having to go full spoiler, while there are certainly parts of the whole Hallows thing that I think mesh quite well with the story - Harry's mastery of the Invisibility cloak, which is one of the Hallows, is a nice reminder of where Harry's strength's lie - but the Hallows, like all of Dumbledore's family history, felt jumped on me, not lead up to properly in the previous books.

It's like all the pieces were here for a tremendous ending, but each individual piece was glopped in. The various sequences were often so disjointed from one another that I would have to go back and read carefully for the seam, the transition. While I absolutely love the fact that Neville ends up being this amazing leader, dispatching one of the Horcruxes, holding the students together. He was, after all, just as likely to have become the Chosen One, based on the prophesy. But the prophesy isn't fate - Voldemort makes choices, as do Harry and the rest. I was less pumped about the ending for Malfoy. It's less that I wanted him dead, but more that his continued importance seems unlikely. And it bugged me that the musketeers kept having to save his ass over and over, and they kept doing it to prove that they are the better people. Narcissa and Lucius Malfoy cradle their sick, asshattish son in the end, and I cringe. Bad people love their children too? Yes, they do. It doesn't make them better people though, and I kept cringing and cringing on through the epilogue.

So, what do I say, not under cover of spoiler? This is a solid ending, my bellyaching be damned, even if the action is rushed, even if the denouement is unsatisfying, if you're looking for something other than the baldest of closure. I've always hated the term “closure”, because it is weak ass psychospeak, but sometimes an ending is just that, the close of the book, the closure, and it is as satisfying and unsatisfying as the thump of the pages hitting other pages, the end. We don't get that in life that often, I don't get that that often I should say, not bringing you into it. Still kinda disappointing, but not as disappointing as I remember.