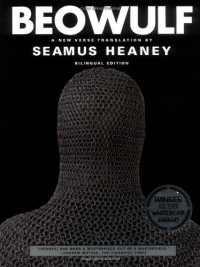 I was recently in a bookstore – gasp, right? Who does that? - and I exclaimed aloud, “Who doesn't love Beowulf?” (This wasn't apropos of nothing; I was considering whether to buy Grendel.) The lovely be-tattooed college student clerk who was sort of eavesdropping and talking to us while we went about exclaiming about this and that – who also ranked all the Austen books in order of his enjoyment, boldly listing Pride and Prejudice as number three – was like, I don't. I was aghast, which is funny. I mean, of course people don't love things I love. But I love Beowulf with such a weird fervor that it hadn't even occurred to me that others don't.

When I was in the fifth grade, my teacher read us some kiddie version of Beowulf. We were young enough still to have story-time, the teacher reading out a chapter at a time of Where the Red Fern Grows - holy cow, the weeping with that one - but old enough to start trying to be cool, impossible though that is with a perm and neon socks. We were all astonishment, this bragging badass ripping off the arm of a monster and beating him to death with it. I know, now, that Big Bad B didn't beat Grendel to death with his own arm, but that's the way we took it. It was this refreshing bit of violence, this wonderful monster, so much easier to kill than the discomfort we felt and lived, the squirming adolescence we were similarly entranced by in Are You There God? It's Me, Margaret. You can't kill your own impending period, much as you want to, conferring in the girls' bathroom when one of us was struck down, bleeding.

I read it again in some dreary text book in the 8th grade, I think in a mythology class where we were treated to some of the most bloodless recounting of the savage, bitchy gossip-mongerings of the Greeks, Romans, and hearth-bound heathens. Anwatin Junior High, you fucked that up good. I knew Beowulf was still awesome, I just had to compare all that boring genealogy that was Greek mythology in the text book to the D'Aulaires' Book of Greek Myths my folks had furnished for me. But then, a few years back, Heaney translated Beowulf again, and I found in it all that shield-beating, clothes-horsing, Germanic-compound-wording that I love so very much.

But, backing up, I think we need to come up with a term for translations when the language being translated from is a dead one. I can't really join in this kind of conversation, because I am a dreadful monoglot, but I think it's interesting to consider who makes better translators – people who are native to the one being translated from, or people who are native to the one being translated to. (And, I'm sure there are ones who are native speakers of both, and that's its own riddle.) Anyway, translations from the dead tongues are always going to be the one way, and, moreover, no one really speaks a dead language, even if they do, because there is no way to correct the accent, no one to explain the obscure puns.

So, I have no idea whether Heaney's translation is any good, and I don't think anyone else can tell that either. Sure, I've heard some stuff about how it's not as precise as other translations, or that the Irish boast style is completely opposite to the Anglo-Saxon boast style, which may absolutely be right, but I love this translation for completely weird to me ideas about English that are super half-baked. My ideas about English, let me show you them. So, you know, the Normans invaded England in 1066 - a date I was ordered to learn by an asshole history teacher who affected a British accent, God rest his sherried bones - bringing into English this Latinate overlay. By the 12th (or possibly 13th) century, there is the Great Vowel Mutation, one of the best named events in linguistics ever. (And this is why you can read The Canterbury Tales in the original Middle English and sort of get the gist, while things like Beowulf are totally in a foreign language – Canterbury Tales was written after the Great Vowel Mutation, and after rhyme had been planted in the alliterative verse poetic garden of the Anglo-Saxons, and taken over like kudzu.) Anglo-Saxon skooched over on the couch, and the Latinate took over the tv remote, and the vocabulary of English doubled. Because the Frankish language of the invaders was the language of power, Frankish words are the ones that continue to be the higher ones, the ones understood to be better. You've got mansion, from the Romance languages, and house, from the Germanic. Which one would you rather live in? There's a doubling of all kinds of terms, high/low, the most obvious ones for the body and its functions. Piss/urinate, shit/feces, fuck/copulate etc. I realize now that some of this is Greek, but fuck off, the Greeks were the fancy for the Romans.) (And that, again, blows my mind, all this embedding of historical cultural supremacy in the language itself. Whoa, I just freaked myself out.)

Anyway, I think Heaney nails something in his translation that speaks to the part of my English-speaking brain that is the invaded Anglo-Saxon, in her ill-lit mead-hall, beset by monsters and the French. I want to say something about the narrator of this work, that anonymous monk, who pops in from time to time to break it down, hit the unwanted Tolkienesque aside of poetry, chide us, or talk smack, but then I don't really think he'd appreciate it if I started droning about the narrator. I love him though; he's funny as hell. The story itself is told so oddly, with an Imma tell you what Imma do, then Imma do it, then Imma tell you what I done did construction which, you know, is a little hammy. I'm not sure how to put this, but I kept thinking about Sir Gawain and the Green Knight when I read this, because that has this strange attentiveness to describing food, and Beowulf has a similar attentiveness to describing weaponry. (Gawain also describes clothes, but so much more sensually. The silk underpants of Gawain are particularly noted, if I'm remembering correctly.) I want to make a joke about British cuisine here, but you have to fill it in yourself. Something about the French invading with sauces, and being completely beat down by the boiled vegetables? Whatever. You know.

So, here I am, second read through, and this Beowulf is still wonderful. I read in a cabin, on a porch in the moth-battered light. The last trip up, my mother watched a bear lumbering through the yard, and told us, and we told our children, who thrilled with idea of the beast outside the light our habitation throws. They worried, and we soothed their worries, but the monster still thrills. I love that Beowulf ends on a sour note, Wyglaf prophesying doom, and the narrator backing that prophesy with the help of narrative hindsight. I love the weird, fatalistic Christianity. I named my cat Grendel; this was probably a mistake.