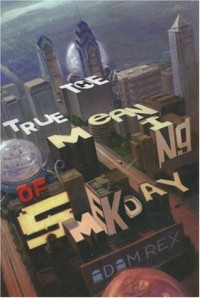 Adam Rex rules. I'm a pretty huge fan of his picture books, because they combine fantastic art and a zingy word-play. They remind me of Fractured Fairy Tales, from the old Bullwinkle & Rocky show – intelligent enough for kids, and cute enough for adults. (No, I haven't mixed up my adjectives there – mostly I think adults can be the dumb ones when they choose picture books, because instruction is often the death of fun. So often awards for children's books – hell, awards in general – value the message over the experience – look, another vewy vewy impowtant book about shawing! Or whatever.)

Anyway, this book came into my hands because my brilliant son won a costume contest, and was allowed to pick from a table of books. “Adam Rex is my favorite author!” he's fond of exclaiming – yes, the Book Dork Force is strong in my family – so he picked this, much to my glee. We've been having a tug-of war with this book ever since. Each time he catches me reading it, he takes it from me. “This is MY BOOK.” I sneak into his bedroom while he's asleep and pry it from his hands. He charges into my bedroom and pulls it off the stack and drags it back to his lair. Good times.

This book has a very odd structure. The first half or so is a series of essays written for an essay contest - “The True Meaning of Smekday” being the topic, natch – that keeps revising the narrative with more and more detail. Gratuity Tucci, the very wonderfully real narrator of these essays, tells the story of Earth's invasion by aliens (who rename the planet Smekland), the relocation of the population of the US to Florida, then Arizona, by said aliens, and her own slowly developing friendship with a Boov named J.Lo – one of the invading aliens in question – while she tries to find her mother. This description more or less captures the weirdly satisfying, mix in this book: on the one hand, it's about concentration camps and forced relocation, and on the other, it's about goofy aliens and eating urinal cakes & a cross-country road trip with a cat and a flying car. The dialogue is flat-out funny, the situations ridiculous, with Rex's sly cartoon's often supplying backstory in a way that intelligently side-steps the infodump. The tone is almost foamy, with a lot of wild juxtapositions and pop cultural references, and it took a me a while to relax & feel assured this wasn't one of those crappy kids fictions that confuse frenetic mugging for character. (I'm shooting at the Shrek movies here, which combine my hatreds of Dubious and Loudly Telegraphed Morals with Instantly Dated Jokes. Sure, it's Okay to Be Ugly, girls, but you still have to Define Yourself by The Man You Love. Bah. Poop on that.)

This book reminds me of two of my most favoritest things: Buffy the Vampire Slayer and Suzanne Collins's books. Rex has the knack of turning his scenes from comedy to heartbreak with whiplash effect, like the best of Buffy, and although it's not nearly as overtly dark as the Hunger Games series, it has that social-commentary-wrapped-in-spectacle thing going for it that Collins does extremely well. You read because it's fun and fast-moving, with a nuanced narrative voice, but Rex bases his comedy on some incredibly uncomfortable things, like that hoary old American panic generator, race. For example, our heroine, Gratuity – her name, and the naming of things in general, is a whole other gag that I'll not get into here – is the single daughter of a single mother. Her mother is white, her father black. People keep mis-identifying her as one thing or another, questioning her ancestry, making wild assumptions about her based on how she looks.

While in Roswell, hanging out with a group of alien fanatics, she's introduced to a Native man whom the town residents call Chief Shouting Bear, but whose real name is Frank. (Another name/identity gag – I guess it's hard to avoid talking about, because they're everywhere in this book.) Gratuity tells him she's half-white. “Which half?” he says. “Uh...dunno. Let's say from the waist down,” she replies. “I only hate your legs,” he says, and christens her Supidlegs. There's at least one other excellent bit about race in the book I could mention, but it's so late in the story that I'd dump a bunch of spoilers if I detailed it too closely. I'll just say this: filling out government forms is almost always funny, because so often they ask the wrong questions the wrong way. Smekday has a lot to say, just under the surface, but it refrains from decanting those observations into the Big Moral, the didactic stick that comes out and clobbers you at the end of so much YA stuff. In fact, here's the last paragraph. No spoilers, I promise:

“You asked what the moral to my story was. I'm not sure real stories have morals. Or maybe they have so many it's impossible to chose. But here's one: what goes around comes around. And as far as pets go, a cat is nice thing to have.”

I'm almost inclined to give this book 5-stars – really, it's that intelligent & fun, but I'm going to be a big crank and withhold one for one extremely selfish jerk reason: I HATE THE QUALITY OF THIS EDITION SO MUCH. The paper is just barely better than newsprint, and Rex's drawings are reproduced so low-res that you can almost see the pixellation. The way the pictures are included feels like an editor woofed their placement several times – the images coming too early or too late – like they'd hastily changed the pagination from the hardcover to the paperback without any thought to the flow of the images and words. Shame on you, Hyperion Books; way totally to cheap out, and a book so good it's really a shame.