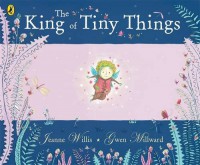 These books by Willis & Millward keep finding me at just the right moment. I found [b:The Bog Baby|4926603|The Bog Baby|Jeanne Willis|http://ecx.images-amazon.com/images/I/4168rpbZf7L._SL75_.jpg|4992207] last time I was up at the cabin, and due to wonderful Goodreads friends, this hit my doorstop just in time for me to go up again. (Sidebar: Dear American publishers, Publish this book in the the States. Kthxbai, Ceridwen.)

This is a sequel of sorts to The Bog Baby, and deals with the same themes of that book: children and nature, the lazy days of small people watching the small creatures live out their small lives. The principles from the first book are now staying in a tent in the yard of Nonna and Grandpa, playing with the flashlight the way you do when you are in a tent in the yard. One year when I was 14, I and 3 of my friends stayed with my grandparents on their property on the shore of Lake Superior. We were banished to a tent, because my uncle and boy cousins were staying there too, and there was no room. Every 7 years, the tent worms, or army worms, hatch out en masse and eat the North woods, and it was that year when we were giggling in the tent. We were pretty citified kids, and we would shine the flashlight up, creating a silhouette of a caterpillar climbing its way up the outside of the tent, and scream, and speculate whether it was in or out, until one of us would raise our arms and flick, and the caterpillar, always outside, would arc off into the grass.

Seven years before I was seven, and Grandma would pay me a penny for each worm I picked off her rose bushes. I put them into a Folgers can she gave me, and at then end of my harvest, there would be several inches of writhing army worms in a can. When I came out in the morning they were gross and dead, and Grandma would shrug and tip them into the soil at the edge of the garden. She isn't exactly a farm girl - her father ran a general store in a small town in Minnesota - but she still has the callous farm attitude towards animals seen as pests. Several inches of dead army worm are soil, and they go back to the ground, and it saved her roses. Amen.

This book is less callous than that, the flashlighted girls meeting the king of tiny things, of the slimy, the gross. He's a Puck of the slugs, and shows the girls all the busy, decaying work night crawlers and beetles do when we are abed. At the cabin this weekend my boy was pulled outside by the boy of a friend of mine. My boy is an introvert - surprise, given his parentage - and unlikely to strike out into the grass on his own. But this other boy and he found worlds of grasshoppers and caterpillars out in the wild, bringing them back to the cabin in cupped hands. They found at least a dozen of something I had always referred to as Wholly Bear caterpillars. Oh, and I have found them on a google! My childhood nomenclature is not wrong!

They put them in a brownie tin with a lid, some rocks and leaves, and the wholly bears inched around. Several of them, in self defense I think, began to build cocoons, surrounded in fine threads in the morning, and by the evening, encased so we cannot see the magic of their transformations. We went for a walk along the deer path, and I almost walked into a slug hanging from a fine wire of slime at eye level. The boys were all lust to bring this slug home, but I said no, and we watched this slimy fellow twist on his string in the forest air. The King in this story falls ill, appears to die. The girls are preparing their matchbox funeral when he appears, transformed, bright and winged.

Bugs. They are mystery and grossness, and this book captures the transformations and slime trails of all the wriggling, crawling things, and the kids at the right age to watch them, to capture them, to be told to set them free, and freeing them; the metal pan in the grass and the rush of jumping things jumping to their outdoor lives. Two of the cocoons made it home in the car, in a brownie tin, and I hope they become the moths they aspire to. Amen, again.

And this has nothing to do with anything, but I have been all over this album by Canadian singer Rae Spoon, and you should listen to this song about the Great Lakes.