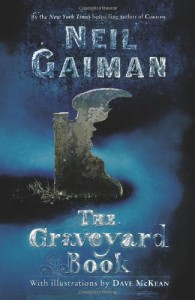 This is the sweetest story I can think of that begins with the bloody murder of a baby boy's family. The boy is then adopted by the dead and undead denizens of a graveyard, and the stand-alone short stories that make up the novel take place at roughly two year increments throughout his life.

The best of children's stories speak to both the parents and the kids. Sometimes I think about crap like The Yearling and other I-had-to-shoot-Old-Yeller-because-it's-somehow-good-for-me stories and I wonder: what kid voluntarily picks this crap up and reads it? For fun? Will his neighbors be quoted, later in his life, after the arraignment, as saying he was always so quiet? Admittedly, I was never a young boy, so I didn't have the bother of having to grow into manhood and all that, but seriously people, is taking a shovel to a fawn the best way to go about that?

I digress. But I do have a point. (Wait for it...) Juvenile lit often has this horror at the center as some kind of inoculation against the rot in the family, the society, the wherever the author puts the blame for children's inevitable loss of innocence and potential. Gaiman, for all of the ghosts and ghouls and vampires, tells a very gentle tale. The past is worth knowing (ghosts from all eras educate the young man) but not perfect or a lost Eden. The modern world contains dangerous and murderous people, but in some ways the worst acts are perpetrated by our hero in the innocence of youth.

I still haven't work out exactly what I think, but I thoroughly enjoy that I haven't worked it out yet. Thanks Mr. Gaiman!