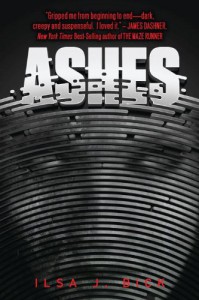 I don't mean this nastily, but this book did not do it for me. Mostly I think it's wrong-book-wrong-time syndrome, so you shouldn't take my grousing too seriously. This may be a good book for you, whoever you are, and my two-stars "its ok" means exactly that: it's ok.

Teenage Alex, who is dying of a brain tumor, goes off to the Wisconsin woods to go on walkabout after her parent die and she realizes, given the tumor, she may never have the chance again. A weird pulse goes off seemingly curing her ailments but killing anyone between the ages of 20 and 60. Young'uns (roughly anyone past the age of puberty) who are not killed in the pulse transform into bloodthirsty zombie monsters. But not Alex, of course. She's with a grandpa and his grandchild charge, a 9- or 10- year old Ellie, when the pulse happens, and the section dealing with the grandfather's death was really good.

This should be a slam dunk for me. Here's some zomzomzom fic taking place in an area I know well enough to sit up and take notice: the snow-wintering Midwest, with its small-towned small-mindedness. Then Ellie settles in like a headache. I haven't encountered a child character as sucky as Ellie in a long while. My son is near her age, and if he said any of the stupid, obvious shit she does, even if I were bleeding out in my oldness, I would rise from my grave and put him down. This is what we call parenting, when we are being obnoxious. No child character should be allowed to speak as plainly and act as plot-inducingly as this. Time out, snot-nose. You go lay by your dish.

I didn't even have a problem with the shift mid-book, which had our principle, Alex losing her romantic lead, a soldier with seeekrits, and Ellie in a tumble of action. See you later, Ellie, or not. That was actually kind of cool, nodding towards the randomness of survival in a wasted America. You will not get what you want. The end of the world was not designed so you can fall in love and have babies to repopulate the Earth. This isn't about reforming a nuclear family in a wasteland to make the reader feel better. Good.

But, then she falls in with small town, but with seeekrits, I totally lost interest in the cult dynamics, and fast. I spent my giving a crap on unworthy Ellie and an obviously damaged love interest, so when we started into character sketches for people who were clearly evil and insane, I was all a-meh. I skipped ahead to the ending, which had a nice, evil snap to it, like a Twilight Zone episode - oh god, my glasses! how will I reeeaaaad?! Then I realized I wasn't going to backtrack and read the events leading up to the snap. There wasn't enough here here to keep me going. The prose is workmanlike, and often really good in places, but not good enough to keep me from skipping to end and spoiling myself on the twist.

Plus, I keep seeing these nutty religious cults popping up in post-apocalit, and they are beginning to bother me. They feel like easy targets - omg, maybe we're the real mindless monsters, have you ever thought of that?? - and I'm just getting tired of authors taking aim at the side of that barn. Yes, I think we can all agree that secretive, insular communities run by charismatic leadership are a bad idea. Moreover, I just don't buy that this kind of community would have such a well-developed ethos just a few months after the pulse.

But that is just me, and if you are looking for some fast-paced zombie thrills, you could do a lot worse.