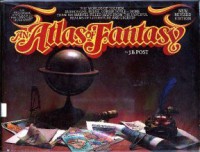 I rescued this book from certain doom yesterday - you're welcome - and in order to do so, I had to find my copy and page through it. So I might as well review! (The certain doom is the fact that Goodreads will no longer display book data that comes from Amazon. If you follow the link in the blog post, you'll get a list of books on your bookshelves that are in peril. And before you freak out, it looks as though your reviews will be safe, even if they are written for a book only listed through Amazon info, just all the information will be stripped from the book page. So it will look like you wrote a review of a phantom book by nobody.)

I spent nearly two decades working as a picture framer, and we would become our least productive whenever we had a map to frame. Maps of real places are political as hell - just get a cartographer going about the Mercator versus the Peters projection - just like any visual display of information. What goes in is a choice, as is what gets excluded. The maps in this book are all of imaginary places, which makes that whole wax-ball even crazier. Listen to this, from the introduction by Lester del Rey:

A map, as the sematicists tell us, is not the territory, as a symbol is not the entity. But magic has not accepted this; in the worlds of magic, the symbol controls and dominates. And a map of one of those worlds can open the territory beyond the power of words to describe.

That is the hottest thing I've read this week. I am fanning myself here.

The editor of this book is using the term fantasy in its little-f sense - though there are plenty of maps from capital-F Fantasy novels. For example, the editor includes places like Eden and Hell, Anthony Trollope's Barsetshire, or Treasure Island because the maps are wholly imaginary. (You may believe in Hell or Eden, but certainly no one has been to those places and drawn a map. Or nobody credible anyway.) But he excludes maps of places like Thomas Hardy's Wessex, because Wessex is mostly Southern England with the places renamed: "it is not merely that a real place inspired the Wessex locale, it is that locale." Dude should have used a semicolon there, but I totally love this sort of nerdy attention to taxonomy in my reference material.

The revised edition of this book (which is the one you should try to get, if you have any interest in it - the maps are better quality, and a bunch more were added) was published in 1979, so this is a little dated, but in some ways that works in its favor. Growing interest in capital-f Fantasy in the late 60s and 70s, and the influence of Tolkien in making maps de rigueur in Fantasy novels means there are an awful lot of them now, and that much harder to pick and choose. This manages to hit most of the biggies - Narnia, Prydain, Pern - without getting bogged down in latter day Alagaësias. (Oh, how I loathe that umlaut.)

My only bitch is that there isn't an index, which seems to be a commonly overlooked part of non-academic reference stuff. It makes looking for a specific thing super annoying, as you have to go through the table of contents closely, and that seems to be arranged only by chronology. Which, you know, is not the user friendliest of search methods.

Also, and I know this shouldn't be included - and it isn't in the book - because it is mostly a real place re-labeled, I am reproducing a map to Sinclair Lewis's fake state of Winnemac because it is so cute:

Lewis had to invent Winnemac after Sauk Center got pissed off at him for renaming the town Gopher Prairie, but otherwise leaving it placed in the same spot in Minnesota, and then attacking it with satire. Political, see? Maps are so cool.