My Year of Flops: Xombies 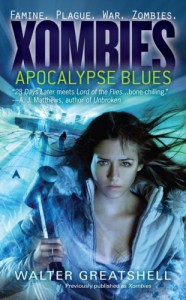 One of my favorite (non-Goodreads) reviewers is a guy called Nathan Rabin, who writes for the AV Club, the critical wing of the Onion. He started a project a few years back where he reviewed a movie that had flopped, every week, and the reviews are collected in a book called My Year of Flops.I loved this series, a retrospective of failure and why those failures happened. He developed a rating system for these films, based on the movie Elizabethtown, which was the first MYoF subject.

The films could be a Failure, or a Secret Success, or a Fiasco. Failure is obvious; secret success is too. A fiasco, now, that takes some stones. That's a mess of epic proportions, a labor of love and insanity, a balls-to-the-wall disaster that mushroom clouds with epic incoherence. This book is a fiasco. Any one section could have been its own book, but this book hurtles along, pulled by this endless active need to get to the next thing, the next idea, and so it's blammo! action! this one idea! psyche! moving on! introduce a character! kill him! make him indistinguishable from some other guy! blue people! crabs! a sub! blammo!

This book is compulsive in its need to get to the next thing, the next situation, and as a consequence gives every situation short shrift. Each episode is introduced, set up, knocked down, rat-a-tat, and while I think there might have been a larger point, it was so confused, so barnacled with extraneous styles, actions, characters, sub-plots that the point was groaning with the weight of it all.

A girl, Lulu is hanging out with her deadbeat mom, who is semi-stalking a guy that she claims is Lulu's father. Lulu and mom head into town when it turns out that ZOMBIES RUN, OMG MOM'S A ZOMBIE. Maybe Dad grabs the girl, then we're in a military sub and it turns out that there's a bunch of confusing stuff about the military and Maybe Dad, and a bunch of boys, torture, and shenanigans. And then a listing ship in the Arctic, with a bunch of weird Brit characters – which was my favorite sequence, told well -- then a dystopian society run by rich guys, and a bunch of Aleuts, and, seriously, what is going on? For no good reason at all, Maybe Dad is understood to be Dad, and that itches me.

Lulu is never convincingly a girl – I have spent some time being one myself, and I found a lot of her motivations hard to follow – and despite having it explained to me why she is important to the whole cure for the Xombies thing, it didn't track. The X in xombies is because the pathogen or whatever it is affects women first, get it? XX??? But Lulu has some sort of disease that makes her not-menstruate, so she's safe or something. And then this gets tossed later in the book where a doctor says to Lulu, you know, you don't have that disease, the reason you don't menstruate is because you've been an anorexic since puberty. Which. this is not casual information.

We've just gone through this really long sequence where food is being rationed and everyone is semi-starving, but Lulu has been given extra rations and is scarfing them down. This is where Lulu really stopped being a girl, or a character, for me. You can't drop this sort of thing on me, from another character, when the first person narrator is not thinking like an anorexic at all, in a situation where she would be grappling with food issues non-stop, and likely trying to control an increasingly out-of-control situation through her food intake. Lulu, our narrator, doesn't say boo about this, and that was a total fail for me. A random line about how she “keeps secrets from herself” is not enough to reclaim this personality gaff. I am aware of this thing called the damaged narrator, but there comes a point when the narrator is beyond damaged into incoherent or unbelievable, and for this reader, Lulu was this.

There's some other confused stuff about gender which is too hard to explain, mostly in the weird sequence in the richy rich section. All I'm saying is that if you are one of the few ladies left in a fucked up plutocracy, you are not going to be a sexually jealous bitch. You are going to be worrying so much about the impending gang-rape, or recovering from the last one, that you don't have time to be all like, who's the new chick, and is she going to take my man(s)? I'm not saying that women are all wonderful and altruistic, I'm saying that we're not all fucking stupid in crisis situations that hinge on our vaginas. Srsly.

Richard has always bitched about how zombies violate the laws of physics, so they are an annoying monster to him, but the best monsters are metaphors for something else, so that can be okay by me. And they tend to be rigidly rule-bound, like any monster. You can shoot them in the head, or burn them, or whatever, just like vamps don't like the sun and werewolves don't like silver. Despite all this jibber-jabber about the medical causes of zombiism here in the book, the zombies so thoroughly violate physics – these ones can't be killed by any means, as far as I can tell, and arms and legs severed from the body move on their own, often with motivation. How...what? Seriously, throw me a bone here about brain activity after death, or something, because sentient arms do me in. There's some hastily sketched stuff likening zombies to the Marxist uprising metaphors that make zombies appealing to me, as a metaphor, but it's not enough, and too late, and not coherent.

The really astonishing thing to me is that, despite the fact that this book is crammed with all this stuff – gender, the class wars, the military-industrial complex, young love, daddy issues, mommy issues, coming of age, etc, etc – this enormous fiasco, the ending is still totally hanging for the next installment. I guess it makes sense that there is no way that this could tie up satisfactorily, but I have to hand it to this book for having so many ideas that this fiasco had to be serialized.

I'm half-tempted to pick up the next installment, just to watch a thousand more ideas and characters get introduced, and then get dropped for the next thing. Though the characterizations and dialogue are crap, there's some nice set-pieces which were written with energy and imagination. In all the mess was some writing I enjoyed. Zombies are ultimately about mindless activity, and this book has the frenetic activity thing down. I'm not going to call it mindless, because that's not fair, but it sure doesn't stop to think.