For there she was: Mrs Dalloway 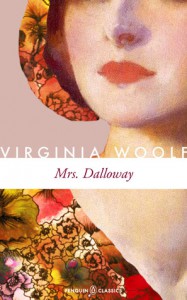 This is a hard book to write about, for me. I read this on planes, and not on foot, in hard tubes that bolt up into the blue and down again into the strange sameness of airports; surrounded by strangers and boredom; trying to mask my weeping, coughing back my laughter; the phones off; the world insubstantial and patchy out the window of the plane. Wrong. I should have been walking, but then maybe flying is the better metaphor for Woolf's strange prose, her perfect movement. At the end, wrung out after a week on vacation, I cried and pushed my head into my husband's shoulder. We talked. I tried to convey why I was crying, but it's all so inexplicable. Not sadness. Not sadness. Something more like the pain of recognition; the joy of disconnect; the shock of understanding.

Ten days before my husband and I married, twelve years ago this month, my grandfather died. My mother, in whose house we were to marry, was in Ireland. My sister, who was to be my only bridesmaid, was sick, so sick, ensconced in my mother's bedroom. I would go there daily, more often if I could, and drop off videotapes of movies for her to watch, clear the dishes. She spent so much time lying down that her face swelled with uncirculated blood, narrowing her eyes to a squint.

Two days before he died he called me from the hospital, and we held a confusing conversation. He kept talking to nurses while talking to me, until he abruptly cut off the conversation and hung up. I tried to say I love you, but it was never said, or only said to the dead air on the phone. I cried then, cried hard, and I can see my not-yet-husband's face while I wept into my hands alive with compassion and helplessness. He never did meet Grandpa. This week, in a shop in New Mexico, I looked over a set of string-ties, felt them with my hands, and told my husband that Grandpa would have loved these. I thought of his neck.

Grandma called to tell me he died. She told me not to tell my mother, not to disrupt her trip. Mum called me that evening, and I tried to lie, stupidly, bowing to the wishes of a woman who had lost her husband. I was strange, horrible. She called Grandma, who told her herself. Mum called back, and I confessed, broke it all over cords that run under the cold Atlantic all the way to Ireland. She was a daughter; I was a daughter; we owe these things to one another. That act of silence was the worst thing I've ever done.

I found myself in Homestead, that homely, ghostly town, in the week before my wedding running the strange minutia of a funeral that is in profound & exact correlation with the detail of a wedding. There is music, and an officiant; an afternoon going through poetry to find the poem to read; a caterer, a church, a house. The front row cordoned off for the old women; hats; nylon stockings; shoes. My father, my mother's ex-husband, in my grandfather's suit reading Fern Hill to a room of people. To me.

"Nothing I cared, in the lamb white days, that time would take me
Up to the swallow thronged loft by the shadow of my hand,
In the moon that is always rising,
Nor that riding to sleep
I should hear him fly with the high fields
And wake to the farm forever fled from the childless land.
Oh as I was young and easy in the mercy of his means,
Time held me green and dying
Though I sang in my chains like the sea."

We took my grandfather's giant, metal car though the car wash before the funeral. He had always loved those grandfatherly Cadillacs and Oldsmobiles, the seat belts belted to themselves so the warning lights wouldn't chide him to buckle up. The car wash attendant, upon hearing of our loss, testified to Jesus. My atheism is soft, a lost tooth or a missing thumb, but I felt his foaming compassion in those imaginary fingers, in that void in my bite, in a way I have never before or since. He admired the car, and I think, had we not planned to drive that soul-body to the funeral, I would have given the keys to him and walked.

I married him, my husband, ten days later, in my mother's house, with my sister, in a small miracle, by my side. During the reading of one of the poems, the Edna St. Vincent Millay I'd chosen before death sat me down to remind me of impermanence, I reached my hand back and found her hand and held it as hard as I could.

"Love is not all: it is not meat nor drink
Nor slumber nor a roof against the rain;
Nor yet a floating spar to men that sink
And rise and sink and rise and sink again;
Love can not fill the thickened lung with breath,
Nor clean the blood, nor set the fractured bone;
Yet many a man is making friends with death
Even as I speak, for lack of love alone.
It well may be that in a difficult hour,
Pinned down by pain and moaning for release,
Or nagged by want past resolution's power,
I might be driven to sell your love for peace,
Or trade the memory of this night for food.
It well may be. I do not think I would."

Maybe families are accidental, maybe. But maybe not. My sister dreamed of him, our Grandpa, the night he died, unknowing of his death. She went to the attic and looked through old pictures. When I told her he was gone, we sat on the floor and she recreated her steps that night: my mother as a child; the pictures of the family car, my grandmother stylish and stunning in her fur-trimmed jackets in front; trips to Florida; unremembered friends. We didn't cry, but talked, and it was like crying in its release. I would be on a plane within a day, and land down into the Homestead of grief, into the city of loss. My sister was too sick to come.

Mrs. Dalloway makes me think of this, makes me think of me. It's shocking to find me there, in London, planning a party, this inconsequential thing; to find me in London, moving, and also far above the earth. She went out to buy some flowers and napped; she ran into an old lover; the party happened and was marred & perfected by death. It's dangerous and egotistical to find meaning in events. My grandfather did not live and die so that I could be reminded of this long string of being, this ineffable web, but I couldn't help thinking it at the time, and can't help drawing the narrative that way now. It writes itself, our lives, my life. A life is not symbolic. The truth is unflattering and lacks the grammar of logic, but it moves in beauty and the snapped sentences of emotion. I have my stupidity for comfort, my unintellectual love, the unthinking feelings of connection and desertion.

"'I will come,' said Peter, but he sat on for a moment. What is this terror? what is this ecstasy? he thought to himself. What is it that fills me with extraordinary excitement?

It is Clarissa, he said.

For there she was."