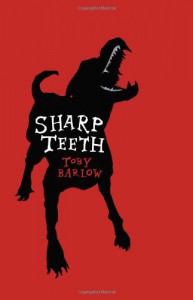 Barlow takes the Homeric fire, tosses on a bunch of kerosene, toasts a couple of marshmallows until they bubble blackly, and then eats them with a grin. Then he throws on a couple of tires for good measure and leans back for a long, slow pull on a hip-flask. Man. I've been doing the sputtering flail whenever I try to describe this book to people: it's a free verse novel! about werewolves! an L.A.! Quit backing away like I'm a crazy person because I'm totally for serious and so is Barlow.

I'm the kind of dork who flips out when I read in one of the blurbs for this book that says it's written in blank verse. Godamn it, blank verse has meter, my friends, and this does not. This is free verse. I'm also the kind of dork who has an opinion about free verse, generally, which goes something like this: free verse is for the lazy. No, no, calm down; I'm also enough of a dork to defend e. e. cummings with my dying breath for relying on other, cooler, more chthonic prosodic stylins. Sure, he's kind of responsible for a bunch of lamers thinking it's okay to just write crap all over the page and call it poetry, but that's like blaming ] for [later, sucky historical movements:]. You know what I mean. (And I'm not talking about [Ayn Rand:] and [Objectivism:], for the record.)

The dorkiness will keep on coming when I try to relate my feelings about the Epic. I'm no Classics major; that train of inquiry more or less ended when a history prof in my freshman year gave the following question as a mid-term exam: Compare the Fall of Greece to the Fall of Rome. Um, does “fuck you” count as an answer? So, my relationship with the Epic begins with [a:John Milton and then terminates in Alexander Pope. It's been a while since I've sung this tune, but let's see if I can hit the high notes: Milton translated the Epic into the vulgar language of English, and much like the translation of the bible into the vulgar language of English, both ended in a profoundly local sense of divinity and identity. Milton grappled with a Mediterranean God/form in his own tongue, and it changes that form, the God, and the tongue in ways that cannot be counted.

Pope tootles along almost a century later, and knowing he couldn't be Milton, broke his Epic musings into two things: he translates Homer's epic into fucking heroic couplets, which is, like, the most insane thing ever, trust me, and then writes what he calls a “mock epic”: The Rape of the Lock. I don't really know what to say about The Rape of the Lock other than it makes me seriously nuts on several levels. It's goofy; it's in absolutely more heroic couplets; it uses the word “rape” in an already (at the time) archaic sense that means “theft”. It's been a while since I've hefted this tome, but I do know that a thousand proverbs in English come out of Rape of the Lock. It's catchy as hell. You can dance to it, even though it kind of pisses you off. So, your English prof would say at this time, the Epic is dead. Long live the Epic.

So. Then. Well. *cough cough* The epic didn't really die there, and then English got itself transported to America and hit the Pacific ocean and sat down on the California coast and thought, “Oh, fuck, man”. There's The Golden Gate by Vikram Seth which is a sort of prose poem/epic Tales of the City. Fantastic, and worth a looksee, seriously. It's funny; it's light; it's written in the Onegin stanza which has a kind of loosey-goosey conversational style to it, despite being rhymed-and-metered. The opening:

To make a start more swift than weighty
Hail Muse. Dear Reader, once upon
A time, say, circa 1980, ]

Ha! Milton may have invoked the wrong muse when he began [b:Paradise Lost, and Seth just sketched her briefly, but Sharp Teeth takes this a step farther.

Let's sing about the man there
at the breakfast table

No muse. Let's just sing. Let's just boogey it out on this California coast in the twisting idiom of supernatural Noir, which is both tired tired tired like the detritus of the American Dream and open open open like the frontier that ends at the Pacific ocean and breaks into the thousand ethnic neighborhoods. The epic at its heart cares and is concerned about God in its many guises; Sharp Teeth is no different. But since Pope elevated the silly to the profound, the epic in English can throw in the kitchen sink, and Barlow does, in spades.

I say there are werewolves, but this isn't the kind of genre fiction that gives a shit about silver bullets and the lame specifications of rule-bound supernaturalism. People become animals. They become these sleek, domestic beings because they are beaten until they change or they share the blood of another werewolf, or because they break with grief after an act of kindness shatters the darkness they have cultivated so closely. There's a lot here about love, and kindness, about cruelty, about the prime mover and his ineffable indifference and old Wile E. Coyote who lopes into the grand creation and arranges a thousand coincidences that arrange themselves into the doofy haphazardness of our lives.

I'm in love. I still won't release my unease with free verse; that's the fur on my hackles that I simply won't shave off. This isn't tight prose, but I like the shaggy dog of its looseness, which says things like:

The secret must stay
and – according to the scientists –
the love will live.
The heart is quite comfortable with secrets.
After all, its home is a dark wet place
tucked in among all the other organs
who aren't talking either.

I've run off the end of the cliff. Love is the anvil that will hit me when I drop. Hail Muse.