I'll give you the take-home before I write this review, because I might get bored and wander off: Dani O'Malley is the Scrappy Doo of the Feververse. Which makes her the Dawn Summers, Jar Jar Binks, or Wesley Crusher of this franchise, if you lack familiarity with the buzzkill that is Scrappy Doo.

I wanted to give my read of this novel the most auspicious reading environment possible, so I waited until I was good and sick with a cold that has surely done something terrible and permanent to my lungs to start reading. I hated the crap out of the opening of [b:Darkfever|112750|Darkfever (Fever, #1)|Karen Marie Moning|http://d.gr-assets.com/books/1320533920s/112750.jpg|108558] when I read it in full health, and it was only after being softened up by illness that I was able to stop hating Moning's writing tics and Mac's voice long enough to get into the story. Darkfever ended up being a solid read for me, definitely not the best thing I'd ever read or anything, but interesting enough to hook me into reading book two.

Which is when I went completely insane with TEH FEVER and spent some of the most enjoyable lost Sundays of my reading life freaking out about Mac and Barrons and the increasing stakes and deepening darkness of the Fever world. Moning's got some stones in that series, pitching a full scale armageddon into the third (I think) book, raining death and destruction down on our little attack Barbie, building a complicated mythos, and kicking ass while chewing bubblegum.

Girl-pulp has never especially been my thing, but the Fever books had my number. I am not now, nor have I ever been, anything like MacKayla Lane - had I known her in high school, I would have written evil shit about her in my journal while sitting friendless in the library - but older me certainly appreciated her difficult transformations from helpless bobble-head to someone who managed to be both girlish and powerful. Plus, the Fever books managed to tackle issues of sexuality and trauma in a way I think girl-pulp is essentially attuned to, but usually cocks up because of wish fulfillment or chicken shitting out or something.

Point being, I knew Dani from the Fever books. I knew how much she bugged the ever-loving fuck out of me. And I knew my shabby track record with book ones of series by Ms. Moning. (I see I have failed to mention that I tried to read the first of her Highlander books and fell asleep with the effort; reheated [b:Outlander|10964|Outlander (Outlander, #1)|Diana Gabaldon|http://d.gr-assets.com/books/1304187141s/10964.jpg|2489796] without the historical research being the elevator pitch.) I knew I would do better to read this in an uncritical and infected frame of mind, which I duly did. Alas, friends, I think I would have had to have been a lot sicker to have enjoyed this book. Sicker being the operative word.

Dani O'Malley is living in a post-fae-mageddon Dublin, a parentless street-kid fourteen who is simultaneously pretending to worldliness and younger than her years. Her voice is greatly toned down from her sections in the Fever books, which is fecking good news, because there is absolutely no way I could have taken 400+ pages of that. But it brings me to my first real problem: why in the sam hell do we have a protagonist in a romance series who is fourteen years old? Either you're infantilizing full grown women, or you're sexualizing young women, and either one is bad.

I did a quick check, because I'm anal that way, and I see a notable number of people have shelved this on their "young-adult" or "ya" shelves on Goodreads. Setting aside the fact that the author herself has stated this book is for grown-ups - authorial intent only goes so far with me, and for the thousands of teens that are going to read this book anyway, classifications be damned - for many folk, age of the protagonist is the defining characteristic of young adult literature. And Dani is this obnoxious spaz, literally hyperactive with her ability to move at superhuman speeds: the unkillable, unstoppable force of adolescence. All of her damaged narrator stuff could totally work as a young adult narrative, what with the whole coming to terms with both childhood and childlike cruelty and abuse angle, blahblah blah.

But for me, it's not so much the age of the protagonist as the sensibility of the writing, and I firmly believe that that sensibility is pretty well fucked in this book. It's a pretty standard device of the romance novel to have the protagonist not understand her own desirability, running conversations where dude looks at her with eyes darkened with desire, and she cluelessly wonders, do I have something on my face? (Sookie Stackhouse is the reigning champ of this, despite her alleged psychic powers.) That happens one billion times in this novel, sometimes from point of view sections from dude composing odes to the rigid cock Dani gives him. I'm sorry, what? Come again? No, wait, don't, because that's totally gross.

It's not that I don't think 14 year olds don't have sexualities. I kissed my first boy at 14, and listened to friends report much more, um, adult interactions at that age. It's not that I even think that sex or cussing don't have a place in young adult literature. But I do not like this 14 year old romance heroine in this world of pedophile sex clubs - she keeps thinking back on a club at Chester's that she zoomed through where the working girls were all dressed in little girl costumes while the customers had their explicit way - a romance heroine who is chained up, stripped to her underpants which are described in detail; a romance heroine who at one point wakes up in a bed with a naked dead woman who has literally been fucked to death; a romance heroine who, in an almost laughably cliche section, almost succumbs to hypothermia and must be gotten nude with not one but two dudes whose erections are described as they warm her back to life. This is not young adult content. This is adult content, and I find it alarming in the extreme that 1) I am to identify with Dani as a romance proxy and 2) I'm to find any of this sexy at all.

I'm not going to entertain arguments that Dani is somehow older than her years because she's had a traumatic childhood. Her sections are solidly first person, and my impression of her internal age is even younger than 14: the invincibility, the obsession with candy, her childish conceptualization of her relationships (hers with Dancer being the most ridiculous, imao). So an abused child can make herself dinner; that doesn't mean she's an adult. That means she's surviving, and just barely. I've even seen apologia that posit that because in "traditional" cultures, women would be married with children at 14, this makes all the penis-rubbing on Dani okay. This makes my head explode with rage. This is an adult book for modern adult readers and that we should find all this sexualization of a character who by her own fucking admission doesn't get what's going on around her acceptable is fucking sick. Just, fuck, I hate that I'm even talking about this at all.

Whether this book is young adult or not, it grosses me out that I'm thinking more about the state of the erect penises around Dani than I am about the very real fucking emotional trauma of her childhood and existence. She was kept in a cage as a child, for chrissakes, and it sicks me right out that I'm obviously supposed to be speculating more about which of the three - count them, three - dudes might finally slip her some dick than I am about how obviously fucked up she is as a person, as a child, and as a nascent woman. God. As either young adult or adult literature, that's a major fail. And given how well Moning handled Mac's grief for her sister, despite Barrons walking around like sex-on-a-stick for ages, it feels like a bigger fail.

Now, that I've worked myself up to a froth, back to Scrappy Doo. I think I might have handled all of these pedobear stylins better if there were a story here I gave a damn about, something with emotional weight and teeth. Much as I love Scooby Doo, the reluctant dog detective angle here in Iced is both half-assed and boring: Dani's trying to figure out how and why parts of Dublin are getting flash-frozen and then exploding. Nothing much happens with this for hundreds of pages, short of Dani coming up against some penises and trying to find candy bars. Mac bugged the shit out of me in Darkfever, but her quest for her sister's killer felt like something emotionally real, while here it just felt like Dani yelling lemmee at 'em, I'll splat 'em, but without direction, as this long, obnoxious avoidance of real traumas.

Given the last scene (which is far too spoiler to detail), maybe that's what Moning is going for - a narrative calculated to show the avoidance mechanisms of trauma - but, if that is true, she's done a helluva job pissing me off and screwing around before she gets to that in the next book. I'm not saying that ending was a cliffhanger - certainly not the kind of cliffhanger I grudgingly expect from KMM - but it does have the televisual omigod that has you sitting with your thumb up your ass until next week's episode. (Or, you know, not with the thumb.) I resented the shit out of the cliffhangers in the Fever books because I gave a damn, but here I'm solidly in fuck it, who cares territory. I'm not reading that next book short of miraculous reviews from people I trust, and even if it is miraculous, Iced is disastrous enough for me to warn away everyone but the most avid Fever fan or lover of Scrappy Doo. And to the latter: what is wrong with you?

And, as a final bitch-move, my alternate cover: 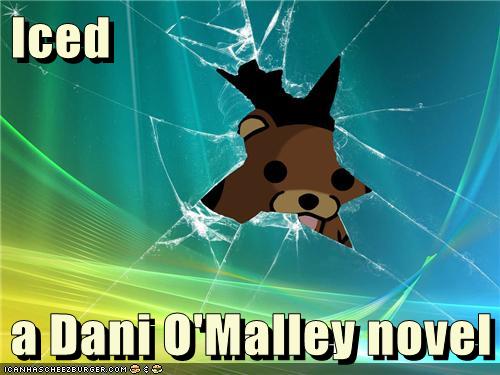