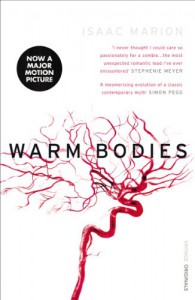 Warm Bodies is a chatty little first person narrative, welcoming the reader into the dreamy emo head-thoughts of a zombie called R. In terms of monster stories, the zombie is your least psychological of the beasts, tending to stand in for more large target ideas like consumerism or colonialism. So running a zombie narrator who waxes all Kerouac about how living with a bunch of Dead people who do nothing but ride escalators (hat tip Dawn of the Dead!) and form these little phony families based on nothing but a bunch of phony phoniness is pretty funny. I'm so alooooone even when I'm with (dead) people! I speak, but it all comes out in grunts! Nobody understands how I feeeeeeel! On one of his forays out to find living food, R eats the brains of a young man called Perry, who was in love with a girl called Julie. R, through the memories embedded in Perry's delicious brain, learns the value of insta-love, semi-abducts Julie back to his love nest, does some eye-gazing with Julie, and generally behaves like your usual stalkerish romantic hero. Awww.

On the one hand, this is seriously funny and awesome. I've said this before, and I'll say it again - so much so that people who know me are rightly sick of it - but vampires are high-functioning zombies. Which is why I have a pretty serious gross-out going with all the hot single ladies in UF/PNR having sex with all those cold, sparkly corpses. A romance between a zombie and a human, in theory anyway, lays bare how gross corpse-lovin' is. But! Quipping aside, I get that vampires are different monsters, in that they are able to complete sentences and sparkle, so when Julie falls right for Mr Decomposing R, whose dialog consists mainly of ellipses and body consists of gray flesh that doesn't have an eight pack, I'm like, hahaha, good one.

However, here's my problem: I'm getting too old for this shit. Because, absolutely, obviously, and totally, this is a version of [b:Romeo and Juliet|18135|Romeo and Juliet|William Shakespeare|http://d.gr-assets.com/books/1327872146s/18135.jpg|3349450], and I am a bitter, wasted crank when it comes to R&J adaptions. I believe fully, in the recesses of my black heart, that Romeo and Juliet are nitwits who must die to prove the situation is serious. They are a couple of bobble-heads kept apart only by familiar feuding, because otherwise they are perfectly matched to one another; they are not the Socs vs. the Greasers at freaking all. They are the same race, same class, from the same town; they have similar ninny friends with the same ninny interests. There's no real reason they're kept apart, like, for example, R(omeo) eating Paris's brains and the brains of everyone Julie(t) has ever loved, including her mother. Romeo and Juliet are hormone-addled dorks who maybe don't deserve to die, but it sure is nice when it happens, everyone all single-tear about how maybe forbidding the fruit made it a billion more times sexy to idiots. Romeo and Juliet aren't admirable or commendable; they simply follow their groins to the logical conclusion, which is live fast, die young, leave a pretty corpse. Bongos, bongos, youth culture, etc. Because if they didn't die, they would have sold out just like the rest of us assholes riding our phony elevators. Hey, nonny nonny.

Mr Marion does a commendable job trying to make the Living and the Dead the same kind of dead-at-heart automata - you're not living, you're just not-dying! - but I'm just not buying it. Especially because he never really owns R's zombie nature. R is forgiven for Paris's Perry's brain-eating something like 50 times in the novel, as early as page 50-ish, and I'm like, what? R is looking a lot like a certain kind of vegetarian vampire I can think of - a high-functioning wanker who is handed all kinds of pussy just for crying over some Sinatra or whatever. Which, speaking of Edward Cullen (I was), when you get right down to it, Jacob would be a much better Juliet to his Romeo, in that they are both from feuding clans with similar magical powers, the same hierarchical families. Only the class difference is a thing, and maybe the race if you consider Jacob to be really Native American and not some kind of long extended hysterical imagining of Native America. Which I don't, or do, depending on whether my tortured grammar here makes him anything but a war-bonnet on a German-American kid with killer abs. I'm reasonable sure there's scads of instances of Edward/Jacob slash fiction which corrects this problem - though I refuse to google - but I just heave a big sigh when I see yet another Manic Pixie Dream Girl redeem some brain-eating douchebag because she's had a little tragedy mixed with a little art school. Awww. Bongos bongos. Hey ninny ninny.

So, now that I've gone into full-on freak out mode, I would like to pull back from the ledge and note that I had a good time reading it. Even though I rolled my eyes a lot - the R&J thing is one thing, but the whole thing about how parents and culture is Square, Man, and They're Keeping Us Down - the prose hurtles along in its first person way. The opening is stronger than the ending, for me anyway. I liked the whole wordless interchange and difficulty of communication of the zombie community, making their silent and decontextual way through the detritus of civilization. I pretty much live for that stuff in fiction. But later, blah, stop making out with corpses. But I'm an old, bony, mortgage-having square who would head-shoot the crap out of some animated corpse my daughter brought home. I'm not even going to apologize for that.

And this is just more of an observation, but this was maybe the n-th zombie novel I've read that treated the nomenclature for zombies like racially charged terms: I can't believe she called me a corpse! On one hand I get it - zombies do have their roots in slave-uprising panic narratives, after all - but on the other hand, reads real cheap when you're dealing with sexy romantic hero zombies and their manic pixie dream ladies. I'm all oppressed and stuff! Of course you are. :::pat pat pat::: Oh, and the edition I read had British spelling, which confused me no end. I had to google to make sure I wasn't insane, and this was located somewhere in the contiguous 48. It is.

So, fun little bit of brains and mayhem, but someone less bitter and cranky, with fewer readerly hang-ups, will probably like this more. Some of us have to work to pay the mortgage, you little shits, and it can't be all eye-gazing and love being the answer. Sometimes the answer is head shots.


I got my copy from NetGalley.