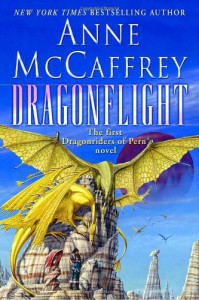 I have known a bunch of people who really like this series, and I finally read it a couple of years ago. There's a lot to like here: a "magic" that isn't really magic, but physics dressed up in a leather bodkin, dragons, plucky girls who swear revenge by all that is holy! I also totally get how much of the rape and bitch-slapping is a function of the time when this was written, and for a lot of people, it slips past unnoticed because they read it so young. Plus, dragons! Wooo!

This is what bugs the shit out of me: McCaffrey sets up a culture, tells us how it works, and then completely disregards that understanding. So the weyr people are understood to be non-monogamous, due to the ridiculous qualities of a human-dragon mind-meld. They make fun of the peasants (or whatever they're called; it's been a while) for their plebeian ideas of marriage, over glasses of pinot grigio and copies of the Utne Reader. Then Lessa (a vengeful virgin plebe) falls in with F'lar (a non-monogamous dragon-rider) and he immediately 'roids out and the next 100 pages are devoted to figuring out how our noble lovers can maintain monogamy. Which of course they do, because they have the love that transcends time, and marrying your rapist makes it simply foreplay, like Luke and Laura. The usual suspects of slut-shaming and middle-class American values intrude, and then something about time travel, the end!

Or maybe the slut-shaming is in the next book. Either way, I can totes see that I would have lurrrrved this series when I was 13, because it would have been 1987, and the 80s felt differently about rape dressed up as romance (witness Luke and Laura). I can see how it was groundbreaking in 1968 when it was published first, and what I view as retrograde was actually progressive at the time. But that doesn't mean I have to like it now. Allowing for historical latitude doesn't actually alter my enjoyment (or lack thereof), it just gives me a critical lens to understand why I enjoy something (or not); it's part of a critical engagement, not an emotional one.