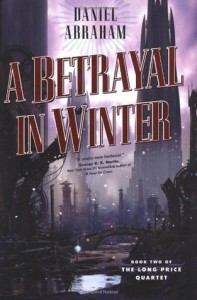 It pisses me off how good a writer Daniel Abraham is. It pisses me off more that you lot don't seem to be reading him at all. I'm going to start buying his books and mailing them to you for your birthday, L. Ron Hubbard style. This is not an idle threat.

A Betrayal in Winter is the second in the Long Price Quartet. I always feel a little weird writing reviews for later books in series, because I'm going inevitably to drop spoilers from the first book. With that in mind, there may be mild spoilers for A Shadow in Summer, but that can't be helped. (As an aside, I keep having to look up the names for these books as I write this review, which is a pretty serious problem, I think. I get how they work together thematically, or whatever, but they do not marry to their content well and are pretty forgettable. I never know who to credit/blame with titles - bad titles can be the fault of either writers or publishers, for different reasons - but these are straight up bad.)

A Betrayal in Winter starts roughly a decade after the first book, in another city, with some cast changes. I really feel the absence of the character Amat at first, with her mashalled, gendered anger, but she's found her corollary in Idaan. Maybe corollary is the wrong word; Idaan is more a cautionary tale. I keep getting surprised by these books, because they have this really sly, cutting gender commentary, and fantasy, Goddess bless it, often doesn't. Come to think of it, books that deal with fantasies of one stripe or other often fall into gender ghettos. Fantasies for women play out one register of stereotypes; fantasies for men another. (Arguably, Fantasy with a capital F is fantasy for men. I do not say this to start fights.) When either kinds of fantasies play out in semi-medieval settings, I think you get a lot of sexist play-set action. Not so, here, at all.

The plot is almost Shakespearean: the king is dying. There is no primogeniture; his sons will have to kill one another to determine succession. His daughters, well, they do not count. All of them are too old to start the killing game, but one of the four sons dies suddenly, of poison, in an opening gambit blamed on our Otah, our upstart, from the first book. This would probably have more frission with an Elizabethan audience, having just gone through the whole mess with, um, something historical that I have forgotten about? Scottish succession and what a total mess it was? Anyway, um, back to my point, which is that if I spend much more time outlining the plot, I'm going to make it sound like one of those court intrigue jobs that I have mixed success with. No. My Dad is fond of quoting the following aphorism: all politics are local. Then he winks and says: No, actually, all politics are personal. Sometimes I fall asleep when I'm reading court intrigue dramas because they forget the actors are people, and not just widgets in a system. At some point, one of the characters says, "We are all men under our robes," which is beautiful and perfect, because they are, of course, when they are men. But sometimes they are women, and that makes a difference. That difference fuels some of the plot.

There's other loves for me in here. The first book set forward some fantasy mechanics that have deepened here. There's the poets, who call into being andats - semi-living embodiments of an idea who are something between a metaphor and bound god. We met one in the first book, Seedless, and here we meet another, who changes our ideas of how the andats work, how metaphors work. There is still the gesture-language, not as fully utilized as in the last book, but one that puts a spin on the statements of characters in this book. And then there is the continuing metaphor of the sleeve, where people keep their correspondence, or have it spill on the pavement; the cloth that covers the wrist also conceals the heart, or reveals; the difference between the mask and the person, the clothes and the man. Or woman. Ah ah ah.

I think this book could almost be read as a stand-alone text, something that makes me quake. I blame Tolkien's editors for breaking LotR into three books when it should have been one, and giving later fantasists license to write a bunch of narratives that never culminate, never complete. I mean, sure, I like how Fellowship ends, with it's downbeat incompleteness, but I can't remember the break between Two Towers and King, and King is mostly appendix, and OMG, I'll stop nerding out here. This book does not ramble to its end, to be begun again where it finished like after a nap. That said, there are things in Winter that tighten into the next arc, a late moment when I realized that the library is at the heart of the metaphors in a way that makes my booknerd soul become incandescent with glee. I'm really impressed, and you lot should get up off your asses and start reading Abraham right now. Now.