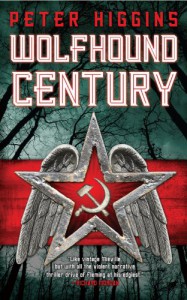 When I read [b:Yellow Blue Tibia|6056346|Yellow Blue Tibia|Adam Roberts|http://d.gr-assets.com/books/1328835417s/6056346.jpg|6232364] I was struck by the lack: why isn't there more Soviet Noir? It seemed obvious when I saw it there: the world-weary gumshoe, the crushing, predatory bureaucracy, the hidden history that is the very history of authoritarian regime. The official story is such glossy fiction, wrapped like a carapace over the bleeding sinew of the body politic. Adam Roberts's story is less alternate history and more historiography, the speculative fiction of national narrative and the secret speech that underpins it. Though, of course, Americans were the most well voiced creators of the Noir genre, Noir seems attuned to the Soviet history in a weird way. The commissioner won't just bust you down to the beat, but disappear your ass to the gulag. Soviets had some of the most fabulously Noir bureaucracies ever built, only sputteringly efficient, capricious, and absolutely deadly.

[b:Wolfhound Century|15790887|Wolfhound Century|Peter Higgins|http://d.gr-assets.com/books/1353855563s/15790887.jpg|18188765] is a strange animal, existing in the tidal edges of genre, the marshlands that are moving silt. Backwater police Inspector Vissarion Lom is called in by high ranking police official in the capitol city Mirgorod to investigate a Moriarty-ish terrorist, and gets caught up in the wheels within wheels of the Noir plot. I wouldn't call this densely plotted, as at least part of the time has to be spent introducing us to the world. In this, Wolfhound Century probably has some similarities with Mieville's [b:The City and the City|4703581|The City and the City|China Miéville|http://d.gr-assets.com/books/1320475957s/4703581.jpg|4767909]. And I say "probably" just because I've never read [b:The City and the City|4703581|The City and the City|China Miéville|http://d.gr-assets.com/books/1320475957s/4703581.jpg|4767909], but gossip has it that the detective plot of C&C is maybe perfunctory, while the cities of Besźel and Ul Qoma are not. I felt there was a good balance of world building and happening, here anyway, and the action is relatively breathless, if you're into that sort of thing. Short chapters, shifting points of view, a fair amount of bloodshed once the stakes start escalating like floodwaters.

Much of the ornament and language is Soviet Russian, something I once knew enough about to be smart, but that has gone hazy for me. Still though, Mirgorod (which translates to "world city" or "peace city") and its origin myths smack hard of Peter the Great, standing out over the swamp that would become St Petersberg with his near seven feet. Or the Akhmatova hat-tip, or the fact that the secret police are call the NKVD (this the precursor to the KGB), or any of a hundred things. But this is not our world, not an alternate history in the strictest sense. The Vlast with its great unconquerable forests stretching off to the west, the steampunk-ish mudjhiks, the fairy tale palubas like some thing Baba Yaga would create, the fallen angels hard and stony: all of these strange, fantastical things shift the Soviet history, twist it. All in all, I get the impression that Higgins's grasp of history is very, very good, and his choice to set this in an alternate reality is pointed, not lazy.

I probably don't even need to say this isn't going to work for everyone - no novel does, even your darlings - but it sure worked for me. I usually get really cranky when writers eschew the alternate history in favor of Bullshit Fantasy Planet, where the writer constructs a near-simulacrum of a time period, but then fudges the details for the needs of the protagonists. (Later day steampunk is guilty of this a good deal, and high fantasy, don't even get me started.) But that is not what happens here. This isn't so much alt-history as coded history: the extremity of the details, the weirdness, the bent genres, all calling into relief the ugly extremity of history, its non-inevitability despite the fact that it happened, and so on. There's a time leakage at the center of the plots, a breakage of possible futures and presents, and given the harsh relief between lived lives and the propagandistic gloss under Stalin, this sort of fantastic time slippery is just a beautiful metaphor.

There's a character called Vishnik here, a member of old aristocracy who, for a time, managed to hide his manored upbringing. But discovery was inevitable, and he was deposed from the university where he taught. He became an archivist of Mirgorod, a sinecure which he more or less takes seriously. He has been recording the moments when the possible present splits from the actual one, and those moments are stoppingly beautiful, half out of time and within it like a gestating creature. There are dog's brains within armored suits which smash the way they must. There are fallen angels - harshly alien - who are at war with the forest. God, this kind of encoding and inflection makes me all giddy, especially hitched to a Noir plot that has breathless short chapters that run and scream from one encounter to the next.

Here's the thing: I'm not pumped about this ending. I don't hate it. I get why we end in the marshlands outside Mirgorod, in the interstitial place of sinking land and silted water. That part works for me.

The world and everything in it, everything that is and was and will be, was the unfolding story of itself, and every separate thing in the world - every particle of rock and air and light, every life, every thought and every event - was also a story, its own story, the story of everything becoming more like itself and less like everything else. The might-be becoming the is. The winter moths, on their pheromone trails, intent on love and flight, were heroes.

But the confrontation between antagonists drags, feeling like this itchy diversion before the real confrontations, which, whoops, apparently won't be happening in this book. I suppose I could work a justification here for why the book never comes to the final crisis - blah blah, something about the insignificance of individual will versus the state kind, etc - and certain personal trajectories are completed satisfactorily, but if there isn't a second book, I will be a cranky cat indeed. So, Mr Peter Higgins, get on that shit.