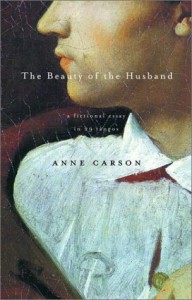 “Every moment some form grows perfect in hand or face; some tone on the hills or the sea is choicer than the rest; some mood of passion or insight or intellectual excitement is irrestistably real and attractive to us – for that moment only. Not the fruit of experience, but experience itself, is the end. A counted number of pulses only is given to us of variegated, dramatic life. How may we see in them all that is to be seen in them by the finest senses? How shall we pass most swiftly from point to point, and be present always at the focus where the greatest number of vital forces unite in their purest energy? To burn always with this hard, gemlike flame, to maintain this ecstasy, is success in life.”

I'm not too embarrassed to admit I've written just pages of garbage about this book that I will not be posting, now or ever. Anne Carson absolutely fries my circuits; she makes me synesthetic and incoherent. I keep trying to explain why I quoted the much neglected and almost ridiculous Walter Pater, a quote that came to my mind like driftwood dredged by a storm as I read and then bobbed, insistent.

I went to visit my aunt and grandmother once. They both live on the south shore of Lake Superior. I took my kids to the lake, to the municipal park with creosote-soaked railroad ties as playground equipment, cordoning rusting swings and concrete habitrails. It was half-spring, that odd interstitial season where the ice had broken to finger-shaped bits and then rubbed themselves warm on the surface of the lake. When the wind blew, the floating ice tingled on each other in this quiet bell noise that could be missed but for listening.

There were heaps of this black stuff - like a soft, black wet sand - running in ribbons up and down the shore. There was an old guy spading it into a used five gallon plastic bucket. What is that? I asked Kristen. Oh, that's sawdust from the sawmills what were on the lake at the turn of the last century. It blows up onto the shore in the spring, and people work it into their gardens. The land there is peat and clay. She might even have had a name for this anaerobic sawdust, but I can't remember it anymore. That's this book: a disinterring and re-interring of the forest duff of the emotional history of marriage.

Duff? Another word I learned on the shores of Lake Superior. The New World had no earthworms before the Europeans came, and those wriggling creatures are an infection. Duff is the crust of decomposing matter on the forest floor, and invasive worms change this composition at its fundement. The outside wiggles in, and it can't be spaded out. The litter should build, not be eaten away.

I think I was reminded of Pater for two reasons. First: Pater is such a poet of the moment, the hyper-Romanticism of that one shining event caught and crushed like a firefly so that it leaves its luminescent ichor on your hands. This is the opposite of a marriage. Not that marriage is a drudge, or a slog, but it is not a moment. Carson always invokes the weirdest muses for her works - here she keeps cutting snippets of the boy Keats, whose consumptive unconsummation of his romantic life made his Romanticism burn. I could speak of speaking urns if I could go off to Italy and die, taking my hard and gem-like flame with me. I can't though. I've got obligations.

Second, I feel like poetry is often argument. The three-part sonnet, with its terminating couplet like the prestige in a magic trick. Ta da! The morals of the epic, however sloppy, spent like rage. This poem is a series of arguments, undertaken in the kitchen, that never rightly resolve to the prestigious coda. Pater's moment's aren't argumentative - they just are - but they reside on a spectrum of the emotional like a teeter-totter. An argument enacted a thousand times is a habit, in black or white like nuns. It is worn like shoes. A moment casts those shoes off, or steals them. So Pater is my wrong muse, like Keats is Carson's.

I don't know. The thing about The Beauty of the Husband, the thing I think makes me impossible, is the Woolfian argument, the quantum leap that dances from q to r through a lot of impossible, everyday connectives that only make sense in the black body radiation of my heart. I can't even argue it right. I've only lit one end, and the light is both lovely and small. I'll dance it to the end.