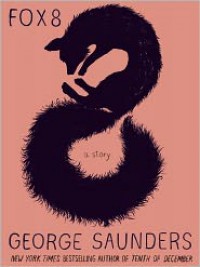 Really more like 2.5, whatever that's supposed to mean. Or, it means I can't say I liked this, exactly, but it also means it wasn't bad. Definitely a matter of taste.

Pro-tip: don't start reading the work of an author by half-assedly picking up a short story cut out of a larger collection and then offered up as a b-side extra, no matter how free it is from the library, no matter how attractive the cover. Don't you want to eat that cover? I sure do. I'm not doing Saunders any favors as a reader by reading this first of his stuff, because even he knew there was something off about this. If you'd already read [b:Tenth of December|13641208|Tenth of December|George Saunders|http://d.gr-assets.com/books/1349967540s/13641208.jpg|19256026], from which this was excised, you might like it more, being able to place it within the album of ideas.

But an epistolary short story written by a fox in fox dialect? Man, I don't know, that's maybe at least one gimmick too many. The puns made me roll my eyes, even though there was an "I know, rite?" that made me laugh, I'm embarrassed to admit. The whole thing struck me as trite and bossy, which is the worst kind of both of those things. This is all sounding meaner than I intend, and I'm sorry. Let me start again.

Based on a source I can't remember or reproduce - seriously, I'm the worst reviewer today - Saunders briefly considered publishing this as a children's book, complete with illustrations. Which is where the few odd illustrations - which I would like to eat, I would like to reiterate - come from. There's a term paper in there somewhere about didacticism in literary fiction and children's lit, with a side bet in eco-lit as cultural superego, which, like all superegos, is both annoying and correct.

I think this will be neat for Saunders enthusiasts, and I dig the whole single short story ebook thing being picked up by your more literary folk. Genre writers - at least romance and sf writers - have been doing this for a while, but all the press I saw about this single seemed surprised.

I liked the very end?