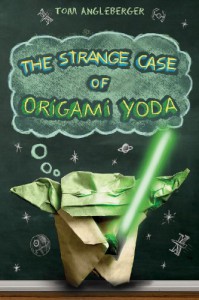 So, I try to be better parent and read the stuff the boy is reading, so I can act like I'm being censorious to the stuff that might be "bad" or whatever. And I think I've said this before, but a middle grade novel is still a novel, so you have to commit to it in a way that you can't or don't with picture books, for better or for worse. (I'm not bagging picture books, just, you can read them in a minute, not matter how many hours you may think about them later. Or not. It's up to you. A novel, that's going to take some time, middle grade or not.)

So, I read this one, mostly because it had an origami Yoda in it, and I'm the kind of Xer dork who will keep crashing myself on the rocks of Star Wars, even though you can get me going on a thousand diatribes about the mess that is the prequels, which do not exist, thank you. So that's where I'm at when I start reading, with a sort of obligatory sense of parenting stuff and a half-annoyed compulsions based on my generational proclivities. So.

The book is a case study, written in a series of first persons with editorial commentary, about the case of the Origami Yoda. Origami Yoda is the finger puppet of a weird kid, a member of the untouchable caste of the 6th grade, who has oracular qualities that are at odds with the weirdness of the kid on whose finger he resides. I was a little bored by this at first, because I'm not in 6th grade, and this case study business seemed so obviously frame narrative that was kind of dumpy.

But it's totally good. I got thinking about the untouchable kids in my school. Maybe there's a better word for this, but there were definitely kids in my elementary/jr. highschool, very short list of exactly three, who were so weird in one way or another that no one would deal with them at all. I'm not going to pretend I was above this, because I wasn't. I'd been friends with one in the middle grades, but by junior high, A was child-like and greasy-haired, in a turtleneck with bears on it, so sheltered by whacky religious parents that she embarrassed the rest of us who were beginning to play the ugly social games of adolescence.

So, anyway, Dwight's the weird kid here, with an oracular finger-puppet and poor social skills, and the case file is compiled by more "normal" kids - arguing among themselves whether it's magic or dumb luck that make Origami Yoda's predictions come true. It seems obvious to me that Yoda's pronouncements are the result of weird Dwight's keen observations and social engineering, but I'm not in 6th grade anymore, thank heavens. So I kind of loved the naive storytelling style, one that was kinder to the weird kid than many stories are. Dwight doesn't stop being the weird kid - there's not a freeze frame of everyone overcoming their perceptions and making friends - but a few people come to a grudging respect, and that's much truer to life, and more fair to the weird kid, methinks.

My real complaint is that the fonts change from person to person - this is a case file, with a bunch of first person narratives - and some of the fonts are freaking terrible. No middle grader is going to care, but freaking Comic Sans belongs nowhere ever. (I realize I've been belly-aching about typography in my reviews recently, and I blame my husband.) I'm giving this four stars, but this is a bit of a round-up, and mostly because the boy made this:

The Dalek looking thing on the left is my attempt; the Origami Yoda is my boy's. There are instructions in the back of the book, and a YouTube video.