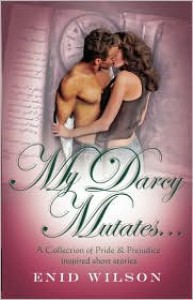 Being snarky in my non-review is more or assurance that I won't win the goodreads giveaway I signed up for, but I can't help myself like crazy. This is such a monumentally bad idea. It's epic. They can carve this stuff into Mt. Rushmore, except that they can't because it would be X-rated and OMG TEH CHILDREN. I just can't figure how time-traveling Mr. Darcy to Egypt and having him bang Egyptian Elizabeth (or whatever, I'm just going off of the book descriptions, which I just skimmed and might be messing up) makes any sense and doesn't violate the characters in a thousand different ways.