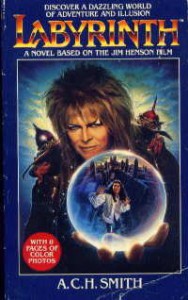 So, I've never read this, and I probably never will, but I have seen the movie several million times when I was a teen. I was at this really weird age, where I sort of identified with the girl, but mostly I wanted to kill her, the way you want to kill yourself at 12. You know, not in a suicide way, but murder. Phew, that went really dark really suddenly. I wanted her to abandon her brother and marry David Bowie. I really hated all the running around in fantasy land she was trying to do, but then I pretty much wanted to do the same things myself. Also, in case you weren't aware, Labyrinth was very loosely adapted from Outside Over There, which is one of my favorite children's books ever.

I just found this video on teh Aetherwebz, and I'm freaking out how brilliant it is. And there's a literary cameo at the end! You will freak out too, I promise.