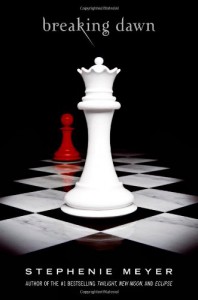 Warning: While I have tried earnestly to hide later plot developments under the cover of the spoiler tag, I can never be sure what constitutes a spoiler for other readers. I do talk in general terms about the plot pretty far into the book, and if that bothers you, you should probably give this review a pass. Also, I swear a lot.


I read [b:Twilight|41865|Twilight (Twilight, #1)|Stephenie Meyer|https://d202m5krfqbpi5.cloudfront.net/books/1361039443s/41865.jpg|3212258] more or less on a dare, mostly so I could swirl my chardonnay and get my schadenfreude on. While I can certainly snob out about how horribly Twilight is written on so many levels, I was surprised by how uncomfortable it made me. Meyer captured itchy, awkward adolescence with such an evocative squirm, and then she relieved that adolescent discomfort with a monstrous romantic bliss. I can see why so many people responded to this, even though I was still too busy breathing into a bag having flashbacks to middle school to relax and and get swept up in the romance. When she's good, she's good because she is not in control of her subject, not able to stop the outpouring of discomfort and terror underlying the domestic bliss that is a woman's expected relief, and while Twilight ends with a certain romantic harmony, Meyer doesn't perfect the ending. All impediments to Bella and Edward are not swept away, and they don't fade out to domestic harmony.

If you think about it, that's fascinating. I think if Meyer had been a seasoned writer, following the rules of mass market romance – and yes, I know that Twilight isn't mass market romance, but it does share some commonalities – she would have written a series of books shifting to other points of view, working out other romances within the Forksverse. Edward's coven would have been all unattached, the tribe would be introduced, and they would have hooked up pair by pair: Mike with Alice, Jacob with Rosalie, that one chick with Jasper. Edward and Bella and then the later couples would cameo in epilogues and picnics with their babies, doling out advice to the new lovers while they writhed in romantic incompleteness until they didn't, and then the sparkle ending could have been repeated ad infinitum. But Meyer is not that kind of writer; her strengths, such as they are, reside in her uncalculating evocation of...I'm struggling here...the terrors and pleasures of American femininity? The inherent conflict between the self protagonist and traditional gender roles? Some shit like that.

The rest of this review can be found on Soapboxing.net