Is Being a Racist an "Author Behavior"? 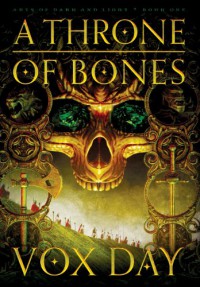 This is one of the books that had reviews deleted in the recent purge about "author behavior" here on Goodreads. You wanna know why? This author is an asshole and you shouldn't read the book because of that.

But let's talk about what exact kind of asshole Theodore Beale slash Vox Day is, and why you shouldn't read this book. (The nom de plume Vox Day is a clever pseudonym meaning "voice of god", gag.) Then let's talk about how it's egregious bullshit that Goodreads is silencing discussion of an author's political and cultural views, views he has absolutely no qualms about voicing publicly and often, views that make me absolutely sick.

But let's back up a bit. I'm an unapologetic science fiction nerd. So much so, that I actually pay attention to the teapot tempesting that goes on in SFWA. SFWA is the Science Fiction Writers of America, "a professional organization for authors of science fiction, fantasy and related genres. Esteemed past and present members include Isaac Asimov, Anne McCaffrey, Ray Bradbury, and Andre Norton." SFWA is responsible for the Nebula Award, which, along with the Hugo Award, constitute the two most prestigious awards that the genre offers (in the US of A at least.)

Nebula nominee N.K. Jemisin delivered a speech in Australia last year on the subject of race in science fiction. As much as I love the crap out of the genre, science fiction and fantasy can be embarrassingly heternormative and whitewashed, a series of idyllic futures and perfected pasts that erase, ignore, and otherwise delegitimize the voices and personhood of huge swaths of people. Her speech was was just balls-out fantastic, putting voice to all kinds of things that I, science fiction enthusiast, hadn't seen articulated that exact way before. Big <3s, Jemisin.

Which is why I watched with horror when Theodore Beale took a racist dump in the SFWA Twitter feed, calling Jemisin a "savage" and...let me just let Beale speak for himself:

Jemisin has it wrong; it is not that I, and others, do not view her as human, (although genetic science presently suggests that we are not equally homo sapiens sapiens), it is that we do not view her as being fully civilized for the obvious reason that she is not.

She is lying about the laws in Texas and Florida too. The laws are not there to let whites “just shoot people like me, without consequence, as long as they feel threatened by my presence”, those self defense laws have been put in place to let whites defend themselves by shooting people, like her, who are savages in attacking white people.

Unlike the white males she excoriates, there is no evidence that a society of NK Jemisins is capable of building an advanced civilization, or even successfully maintaining one without significant external support. Considering that it took my English and German ancestors more than one thousand years to become fully civilised after their first contact with an advanced civilisation, it is illogical to imagine, let alone insist, that Africans have somehow managed to do so in less than half the time with even less direct contact. These things take time.

Being an educated, but ignorant savage, with no more understanding of what it took to build a new literature by “a bunch of beardy old middle-class middle-American guys” than an illiterate Igbotu tribesman has of how to build a jet engine, Jemisin clearly does not understand that her dishonest call for “reconciliation” and even more diversity with SF/F is tantamount to a call for its decline into irrelevance…

Reconciliation is not possible between the realistic and the delusional."

I...do I even have to explain why this is the fucking worst? He was expelled from SWFA for this bullshit. Educated but ignorant savage? Genetic fucking science that a black woman is somehow less than human? Are you fucking kidding me? Ugh, omigod, I have to go walk around a while and calm down.

Okay, I'm back. Heretofore, all these discussions of "author behavior" in the sf/f world have focused on the canonical but, um, problematic writer Orson Scott Card. So he's a vociferous anti-gay activist, Ender's Game is fucking sweet! Which, fine, compartmentalize the author from the work; that's totally valid. When you're dealing with hugely successful, important formative works of the genre, maybe compartmentalization is a thing. But here we're dealing with some pseudonymous asshole who purports to speak with the voice of God, calls black women savages, and thinks that his racist "science" supports him.

Why on God's green earth should I spend my money on this dick's books? More importantly, why should Goodreads shut me down when I talk about this in my review space? Why have they shut down this discussion in even one instance?

To put this review on-topic - I see you, Intern Jimmy - I have almost an allergic reaction to high fantasy that's all about fearsome Witchkings and mighty Amorran legions, a post-Tolkien stew of Elves and Men, with a bunch of apostrophes in the names to prove the situation is serious and whatnot. I would rather eat glass than deal with yet another Tolkien-clone that strips out the folkloric baby and leaves the bathwater. Which is one of the many reasons I'm not reading Beale's book, his racist asshatery aside.

I shouldn't even have to put in this on-topic disclaimer though. That is both stupid and ridiculous, and one of the many reasons I want Goodreads to explain their policy, and what the fuck they think they are doing. Right now, they are on the side of racists, plagiarists and child pornographers, and it doesn't look that good.