If You Were a Palindrome 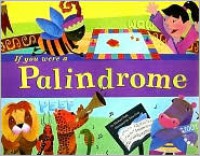 The boy has started reading aloud to me, in what I hope to be many reversals of the parent-child contract that don't end in tears. He's not old enough yet to appreciate how horribly nerdy I am, and how I've visited my nerdiness upon his upbringing, so we had an absolute blast reading this book, both backwards and forwards, the way one does with palindromes.

Not long ago, I was at a brunch hosted by my father, with numerous relations sat about the table. For some reason, we ended up on the subject of palindromes, and then tried to out-palindrome one another. Able was I ere I saw Elba. God lived as a devil dog. A man, plan, a canal, panama. My aunt Kristen had one so long it was almost a sentence by Henry James. Poor boy. He's doomed.

It makes me endlessly happy that something as weird as the palindrome has a name, and that some odd soul decided to write a children's book about its many splendors. I can never be sure what the boy will find interesting, but for some reason, the page with the numbers made him light up like a Christmas tree. "That's a cool number!" he exclaimed, pointing to the 3443 on the picture of an awning of a building. "And that's a cool number!" again and again until all of the cool palindromic numerals had been cited and counted out. The absolute best came when he looked at me and said "You're a palindrome too, Mum." Oh, yes. I am indeed.