Ricky Gervais wrote a kids book! And it's pretty psycho! This is a bestiary of odd creatures called flaminals, who are gross and silly. The descriptions are great, relying on a lot of onomatopoeia - man, did I ever have to google that spelling - and whatever you call words like Carroll invented in Jabberwocky. You know: slimy + slither = slithy? Portmanteau? Hrm, not quite right. The book has the feel of a series of inside jokes with a child, the kind of things a parent invents and riffs on at bedtime, to delight and disgust the kiddies. I can hear Gervais's voice in my head as I read, which makes it better, and I wish there were a recording of such a thing.

I don't like the art that much though, which is overly literal and cartoony in a bad way. The drop-shadows bug me for some reason, but you may have no opinions about drop-shadows, and will remain unbugged. There's also a pop-up version of this book, which I do not like at all. It emphasizes the art, which is weak, and I'm spoiled by other, better pop-up authors writing today. The boy loves this book though, and laughs until he snorts about this flanimal in particular: 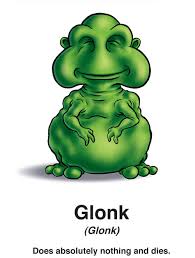 
Kids are weird. Gervais is weird. It works.