About That Man (Trinity Harbor Series #1) 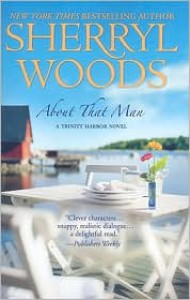 So, I'm stripping the sheets off the guest bed after the second set of house guests have departed for parts Wisconsin, and I find this book lodged up on the window sill. We had two couples stay with us for three days each, with only enough time between them to throw new sheets on the bed and toss all the flotsam into the overstuffed closets. The first set were older, very religious family members; the other young, stylish banker-types. It may seem obvious to you who was the owner of this book, but I was stumped. I immediately discounted the guys, because I have yet to find a man who has willingly read a romance novel, let alone carried one cross country to read on vacation. So that leaves me an unmarried career gal and a long-married empty-nester. Nope, still no idea: I mean, it could really go either way, right?

I sit down with the book to do some sleuthing. I first looked for all the sex bits, because I'm immature. Plus, when men eat up the distance with their powerful strides, that always gets me hot. I determine that the protagonists are named Daisy and Walker, which makes me murderously irritated. Set in Virginia, the dialogue I read is written in Kentucky Fried dialect, with much talk of Yanks and mint juleps and porch swings and whatnot. I feel irritated for Virginians. The back flap describes the plot as Yankee comes to town, then everyone gets in an uproar because they assume he's humping the Sunday school teacher. From the sex bits, he is *actually* humping the Sunday school teacher. Moralistic gossips turn out to be a jerks, also probably hypocrites. The final marriage proposal/ coming together of Bluebell and Hunter takes place during the least likely marijuana bust in the history of DARE, where the pot dealer is depicted as a cross between a rabid wolverine and Scarface. The protagonists marry at the end, and I think get miraculously pregnant, although maybe not.

This is getting me nowhere. I could call them and ask, but now I feel weird. If it's the religious family member, I've now read all the sex bits of the book she left in my guest room. While I may not be squeamish about reading said sex bits and then admitting this on the Intertubes, I'm too much of a big, feathery chicken to have a conversation with this woman with me thinking about the sex bits. And I don't know how to ask my rad, super cool drinking buddy from the bad old days about this without giggling and generally being a horrible friend if it is indeed hers.

Thankfully, my husband comes home, I query him, and he nonchalantly says, “Oh yeah, that's totally [name withheld:]'s.” I am now struck by his nonchalance. Here I am having this big girl attack about how to situate this book into what I think about these ladies and their reading habits, and he's all yeah whatever. Romance novels are a weird thing, for the female reader. There's a lot of snarling, vitriol and irritation tossed their way, and I can count myself as one of those with my teeth bared, on occasion. But something like half of all fiction published today is a romance novel, produced for and consumed by women only. And before you start in about how that's because society is in decline and we're all going to hell in a handbasket or something, the novel since the very beginning has been smeared as a girlish form, not suitable for manly men and their manly manliness. Plus, it might make you crazy. (See: Northanger Abbey and similar.)

So what? I mean, so, what? Reading's a weird thing in general. Back when Plato was chillin' in his toga and writing The Republic, he smeared art as false and dangerous. This is in a culture that valued the crap out of art. So, on the one hand, here we are, modern readers, droning on about how reading is good for you, and scribbling thousands of op-ed pieces about the decline of readership and publishing houses and all that. Then on the other, when we (or maybe just I) are confronted with a romance novel in the guest room, we/I try to determine who is the big silly goose who left it there. So literature is a good thing, all full of manly social worth, unless is makes you a big weeping girl, and then it's a bad thing.

So, okay, put another charm on the feminist reading charm bracelet for this insight, Ceridwen. Good one. But I've been thinking about the twinning of pleasure and shame in women's fiction since my experience reading Twilight. I'm not necessarily sure that everyone would make this distinction, but I've always seen a difference between guilt and shame: guilt derives from self-loathing, while shame from empathy. Shame is the awareness of one's disconnect from the prevailing social ethic, and I don't think that's always a bad thing. I like when it's used as a verb, and it's almost always like this: “They shamed him into doing the right thing.”

So here's this stupid book, and it completely acts out all this stuff about how shame is inevitable because the social ethics are so often in conflict. Finger-waggers are bad because they fail to see nuance, also because while Buttercup was *actually* banging Tucker, their love was pure, and they did eventually get married and have babies. But then, there was some sort of sub-plot involving drug dealers or something. So it's okay to engage in the whole romantic love ideal, even if you do slip up and have some non-Platonic sex, but you shouldn't transgress other social expectations, like smoking reefer. And then, on top of all this, I go ahead and act out a bunch of shame and weirdness about my own overly careful position on fiction and women's fiction.

So, I don't know. I'm not enjoying reading this stuff, but I am enjoying all the talking and considering about women's fiction that my reading has provoked. I'm now currently stumped about how to rate this thing. The use of dialect + the names + offensive Southern caricatures = epic fail in my book. But I almost feel like I shouldn't be messing with the romance ratings, because I don't really have any interest in or understanding of what makes a good romance novel. Not that ignorance has ever stopped me voicing a strongly held belief before. One star it is, Marigold and Dexter, may you live happily ever after.