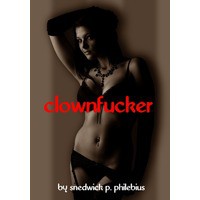 If I had the energy to do a google image search, for sure I would have a funny picture here. For sure googling "clown" and "fucker" is a bad idea, and even in my current state, I know that. You're welcome again.

I blame karen. She started down the path of monster porn - what is going on with people writing about fucking monsters? - and I loves her reviews of such a creature so much I got pulled into the wake. If you are looking for hot sex scenes with monsters - you don't have to admit it, because you're not drinking and befriended to, like, everyone in your life, so that tomorrow when you wake up and think, fuck, what have I done? you don't care - you are not going to find hot sex scenes with monsters here. I have been a part of a romance reading group for a coupla years now, and I have never once seen the words "labia majora" used unironically until now. I haven't even seen them used ironically. I'm not sure there is enough irony in the world to make term "labia majora" ironic. It's like fucking a text book.

We'll see how many of you irl folk I unfriend before the email goes out tomorrow.