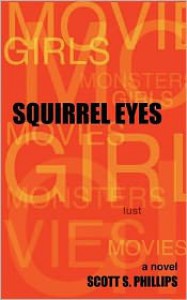 Edit: Scott Phillips posted this video of The Blue Man, which is the short film the protagonist made as a kid in the book, and Scott made in real life as a kid in, um, real life. Super 8mm done by kids about a post-apoc wasteland in the 70s! <3<br/>
https://www.youtube.com/watch?feature=player_embedded&v=UerjDx7NK4Y

Oh man, this book was so fun to read. I didn't really know what to expect, because I've seen a few of Scott's movies, which are definitely more on the grindhouse end of things. Fight scenes, blood splatter, some boobies, maybe some zombies, and off they go. They're fun, if you are into zombies, boobies, and/or blood splatter, but maybe aren't for everyone. I don't mean that as a dis; genre tastes are what they are.

This is not a grindhouse book, whatever the hell that might mean. This is an affecting, anecdotal story about dreams deferred. Our first person protagonist, Alvin, starts the story by slinking back to Albuquerque from LA after his girlfriend leaves him and his film-writing career goes to shit. He drunkenly hits on the idea of making it with his high school girlfriend as the way of getting his mojo back. This is an incredibly bad idea - we all know this - but it makes pretty perfect sense in the stew of shame and loss that Alvin is living in. He falls into re-making a short film that had been an aborted project as a teen, and the sections detailing the process have a lived-it feel & good physicality.

Alvin's voice is just fantastic, and the chapters read like personal anecdotes told by someone who is an excellent anecdotalist. I have this friend Mewes who is the master of the personal anecdote, and he has a couple that I beg him to tell me whenever he's drunk enough. Many of them are from his time in the Peace Corps, and all of them center on vomit and/or diarrhea. At some point, you know he's going to say, "So there I was..." I'm already giggling thinking about them, and I'm sorry I will not relate them right now, because I'll just botch them. Anyway, Alvin reminds me of Mewes, not because of stories of vomit - although there is one funny interlude in this book about the technicolor yawn - but because he's got this great conversational style that knows how to take the folk idiom and twist it. (One example I can think of without looking it up: "She was built like a brick shithouse full of bobcats." Hahaha! Wonderful extension of the brick shithouse folk metaphor.) He's got great timing, and the chapters often end with a nice knife twist, not one that draws readerly blood in an act of cruelty, but one intended to make you look at the situation in a slightly different way.

I found myself laughing a lot while I read this, which is funny on exactly two levels, bitches. It was funny because it was funny, of course, but then it was funny because there's this profound core of loss and pain in this story. The sections that deal with Alvin's family - his mother and brother - rang especially with a kind of truth of disappointment and love, and hung uneasily with the ways family can be wonderful and awful in the same moment. There's this running gag where Alvin starts sobbing every time he gets into a shower - something about the running water unleashing the floodgates - and while this is written semi-comically, it's that sort of Chekhovian comedy that is not funny at all.

This is what kind of kicked the shit out me in the end: talent is not the same as success; and passion does not translate from one medium to another. I totally apologize for this dorky allusion, but I kept thinking of Browning's "Andrea del Sarto" as I read this, especially at the end. Browning's poem is one of his dramatic monologues, about a lesser know Renaissance painter named *cough cough* Andrea del Sarto. He's a failure only of sorts, destined to be a footnote to Michelangelo, Raphael, da Vinci, but a powerful painter of his own. Browning writes del Sarto's monologue as he begs his wife not to cuckold him again, but only in the most euphemistic of terms. The way he talks about his art with both deprecation and longing cleaves me:

Ah, but a man's reach should exceed his grasp,
Or what's a heaven for? All is silver-grey,
Placid and perfect with my art: the worse!

Alvin's a sort of novelistic Andrea del Sarto: a successful vision of loss and failure; conversational and complete on its own, but still bending to the incompleteness that is the lives of all of us who are not stunning geniuses of whatever form. Does that make any sense? It might not. I guess I'm trying to say that I liked how Alvin struggled, finding his joys in the wreckage, remembering what drove him to his life choices, the passions that drive him, etc. The ending was a little rushed for me - I feel like there was a missing scene or two, especially that final, missing confrontation with the ex-girlfriend - but it was otherwise a sensible ending. A good book.

And a last note: I know Scott, and he sent me a copy of this book to read, for full disclosure. It was only available as an ebook at that point - that may have changed - and this precipitated a huge crisis for me as I tried to make my phone into an ereader. A completely ridiculous amount of gnashing of teeth and emails ensued, until I thrust my phone on my friend Jeremy, and demanded he make the Nook application work. Success! I didn't mind reading it on the little screen too much, but it ran down my batteries like crazy, and I still prefer paper. So there.