How Green This Land, How Blue This Sea 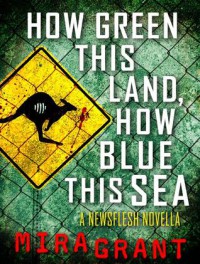 So, as I mentioned in my review of The Last Stand of the California Browncoats, I've been reading Newsflesh novellas as my big end of summer hurrah. While Browncoats corrected a lot of the things I don't like about the Newsflesh world, being as it is an outbreak story unconnected to the events of the trilogy, How Green This Land, How Blue This Sea hit every single thing I don't like about Newsflesh, and then added a couple more, just for fun. This was a Scooby Doo episode, and not in a good way.

The first thing I thought when I read the synopsis for How Green This Land, How Blue This Sea, a Newsflesh novella set in Australia was, are there going to be zombie kangaroos? Because lol, that's pretty much what anyone thinks about when they think about Australia right, Scoob and gang? I'm on record as digging it when non-Americans write about America kinda broadly, because you can get some interesting parallax views that I would have never considered, being inside the boiling, melting pot myself. But this is more adventure tourism based on the laziest of national stereotypes, and much more suited to Saturday morning cartoons based on a talking Great Dane and his highass friends. I can't even say anything about the Australian national character, but I'm going to call bullshit on Mahir's mansplaining, the rabbit-proof fence, and the zombie kangaroo national preserve. Givez-moi un break, sheila. Here's some hot Vegemite down your pants. 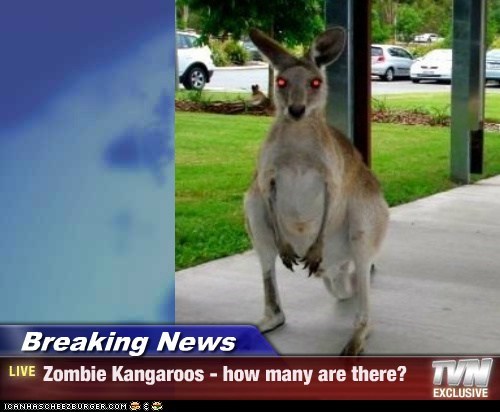 Mahir Gowda, After the End Times blogger who was my favorite from the novels and tea-drinking Brit, goes to Australia to...something. Check out the zombie kangaroo preserve and hang out with some weirdos? Motivations are murky. He meets up with some new End Times bloggers, apparently hired after the events of the trilogy, who hew to the exhaustingly dumb character traits of blogging platforms in the zombie future. Blah, blah, Irwins are always on camera poking things with sticks, etc. Fictionals are dreamy and write poetry and Newsies something about truth and justice or whatnot. I have never ever bought the blogging trifecta outlined in the Newsflesh novels, and because it's been a year since I've read them, so much of the world building stuff has slipped for me because it didn't make any sense to begin with. At the time, I was willing to accept what I felt were dumb, impossible reactions (socially speaking) because I'd been boiling in them for hundreds of pages, but the river had sped on, and my foot went into something less to my liking.

Apparently Australia has a much more loosey goosey attitude towards the six hundred billion blood tests necessary to fucking do anything ever in the rest of the anglophone world (which we've only really ever seen the UK and North America, so whatever about China, Africa, or the rest of you lot.) Mahir eye-bugs about having a picnic; there's a lot of bush-piloting around and Coke-drinking; zombie wombats and some taxonomy about kangaroos. What really set my teeth was Mahir's final speech to a group of semi-rioting outbackers about how they should totally cherish their kinda bullshit freedoms because the rest of us are so busy spooking at Muslim terrorists zombies that our lives are shit, but he wouldn't want to live somewhere with zombats, because security. Also, please get me some tea because I'm British, you see.

Just, ugh, this is so the kind of thing an American would write thinking they were being all thoughtful narrative about our paranoid security state - down to the polyamorous relationship that isn't remarked on in any real way, but just kinda sits there as a thing. We just gutted the Voting Rights Act and DOMA, and one of those things is a shitshow, and the other is great, but I'm sick of zero sum games of rights and freedom and security. I'm sick of reductionist bullshit and other countries as allegory, because other countries are not our allegories. Look, Fred, zombie kangaroos! Bah.

Well, phew, that was something of a rampage, and I feel like I need to pull out of my death spiral a little before I conclude. The thing that garnered this annoying, plot-arc-less story the extra star was a couple of brief asides about Georgia Mason as she is during the last novel. (I'm seriously trying to avoid spoilers here, and, fyi, there are spoilers all over this novella for Blackout, so if you haven't read the series and don't want to be spoiled, don't start here.) Mahir got into the philosophy of the mind stuff that I thought was squandered in Blackout, even if the treatment was kinda cursory and topical. Two stars. Also, kinda fuck this book.